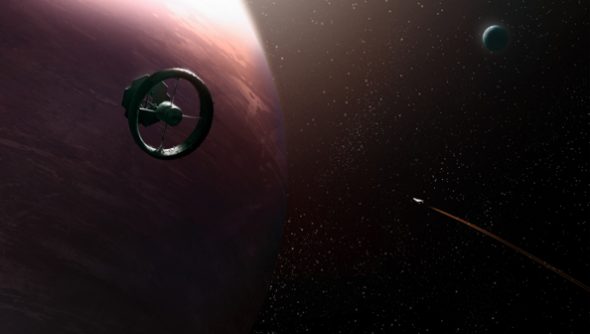 Frontier released a new developer diary for Elite: Dangerous over the weekend, and a fascinating thing it was too. The video had a clearly enthused David Braben – occasionally jump cut as if overcome by space-time jitters – describe the ways in which Elite’s world might evolve over time to accommodate player actions. Some of those actions will necessitate “new missions” designed by Frontier, he says.

Elite’s galaxy “can change over time”, says Braben, and players can be involved in a significant way in that process – “either individually or en masse, influencing one side over another”.

“I think we can have a lot of fun with it, and I think as it progresses through time we can introduce new elements, new missions to the game. So it’s not static, it’s not fixed in that way at all.

“Maybe the convoy you just attacked was carrying something really valuable which then triggers another event in the game. I think that richness, the possibility that every action might be a significant one, makes it very exciting.”

Braben offered an example of a famine-ridden planet which has mothballed its navy to forefront humanitarian aid, only to be blockaded and potentially annexed by a rival system hoping to take advantage of the situation. Players will be able to influence situations like these, and their numbers will influence the result.

“From a player point of view… the missions are not one-shot things,” he continued. “You think, ‘Well, which side do I want to be on and how will that play out over time?’”

If the player has a positive reputation with a victim system, says Braben, they will be conferred in-game advantagessuch as cheaper local goods.

“I think all of that will feed very much into the richness of the game and shows that the players can together very much affect the world as it unfolds.All of this richness still works in singleplayer, but of course you would lose out on a lot of the social aspects of collaborating on one side or another,” he added.

Watch the video below inits entirety at your own risk. You’ll havethe inside of Braben’s head fed through your speakers,hypothetical military blockades and all,

Do you want to see Elite: Dangerous funded? Probably not as much as Drew Wagar, hopeful tie-in novelist with a Kickstarter pitch for a Kickstarter pledge.