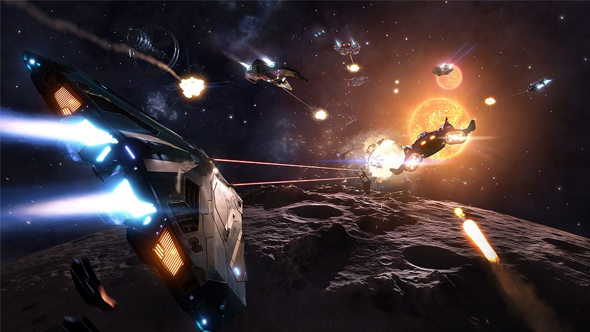 Elite Dangerous 2 is something that could happen one day, but it’s not high on developer Frontier’s list of priorities. In an interview with PCGN at E3 2018, the company’s CEO, David Braben, said that while he wouldn’t rule out a sequel to the deep-space adventure, fans shouldn’t expect to see anything on that topic soon.

When asked if the idea of a sequel was something Frontier is actively considering, Braben said “the world has changed. We’re coming to the end of the fourth year of Elite Dangerous” (acknowledging that if you add the alpha and Kickstarter to that, Elite has been around a lot longer than that).

Elite features on our list of the best space games.

He goes on to say that that’s “a wonderful place to be in,” but that for the moment the company’s focus is on continuing to support their current game. It’s a busy time for fans on that front, as the war with the Thargoids continues to escalate, offering a significant threat to the galaxy’s human population.

That’s not to say there’ll never be a second Elite Dangerous game. Braben clarifies that while support for the current game is ongoing that “isn’t to say there won’t be something at some point.”

I wouldn’t hold your breath on that one, though – Braben finished by saying that any potential sequel is “long time time off and there is lots to do in the Elite Dangerous world.”