Frontier has announced a release date for the second phase of the Elite: Dangerous beta, at the same time revealing a chunk of planned features for the future of Braben’s space sim.

The massive update launches September 30th and will boost the system count to around 500, introducing new ships, new exploration options, new stations, and the ability to grow your combat rating from “Harmless” up to “Elite” status.

As well as the combat status, which naturally includes the infamously laconic “Mostly Harmless” tag, the second beta will have pilot reputations within systems as well as reputations that follow you throughout the galaxy, affecting prices and attitudes wherever you go.

The exploration features hinted at previously will be properly implemented, allowing pilots to scan frontier systems and return to inhabited worlds to sell the data. To enable this, proper system maps will be added to serve the 500 or so new systems. Futhermore, explorers can aspire to own the new Lakon Asp Explorer ship, which has “explorer” in the name, so must be good.

More things! Ships will have a greater variety of upgradable bits, from Life Support and Engines to Shield Generators and Cargo Racks. They’ll need looking after too, as wear and tear will damage your ship both mechanically and aesthetically over time. 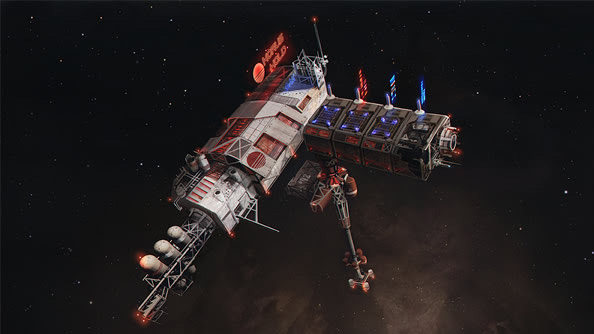 Mine and a cargo-hatch disruptor are being added to the armoury, while small outpost stations (which Frontier describe as “roadside cafe stations”) can be found in remote locations. Occelus starports are new, eyeball shaped stations that are designed to be moved in one-piece to new systems to accelerate settlement.

As of the second beta you’ll be able to see other ships during supercruise and track them into hyperspace, as well as receive updates from the rest of the galaxy through newsfeeds in station service menus.

Finally, Frontier adds, all backers names will be added to the NPC naming database. So there could be a pirate out there with your name on it. Oh, and there are new kinds of planetary rings such as ice and metal. Basically a whole bumload of things have been bolted on, and Frontier show no signs of slowing down.

That beautiful piece of concept art atop this post, meanwhile, shows off what is easily the most stunning cockpit design yet: that of the Imperial Gutamaya Courier ship. Phwoar.