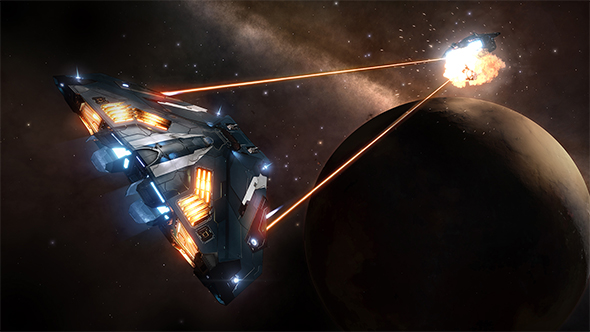 Over a year ago, Elite Dangerous players were concerned that developers Frontier weren’t doing enough to stop the exploit of “combat logging.” The story hasn’t changed much since then, as another player-run investigation claims that Frontier are doing “literally nothing” to punish players who take advantage of the exploit.

Combat logging means forcing the game to quit while in combat with another player, either by killing the game’s task or forcefully disconnecting from the internet. If you try to normally log out of Elite during combat, you’ll be forced to wait through a timer that leaves your ship vulnerable until the process is complete. Since Elite uses peer-to-peer connections for multiplayer, if you forcefully disconnect there’s no longer a record of your ship’s position online. That means you have an easily exploitable way out of any undesirable combat situation. Assuming, of course, that Frontier don’t have a system in place to deal with those exploiting the system, which is the crux of the argument here.

As detailed on Reddit, a group of players started an alternate account in June 2017 to test Frontier’s response against combat logging using a more extensive process than they did last year. They recorded five incidents over the course of five months, and reported the test account each time. Despite assurances from the support team, they say the account ended up receiving no punishments, and not even a warning.

Frontier community manager Paige Harvey responded to the report by saying that “the team responsible for investigating issues such as cheats and combat logging have reviewed and verified that their processes have been followed, and that the account was reviewed by the team as part of these reports.”

Harvey adds that “While we understand the frustration caused when met with combat logging, continuous attempts at uncovering our investigation methods is not the way to assist with this being dealt with, as any information we give could be used to avoid detection.” Further development of the system is a topic of active discussion among the development team, potentially including things like a karma system.

Head of communications Zac Antonaci says that “I wish I could talk through the subject in more detail as I’m confident it would help address your concerns.” But he reiterates that Frontier do not “discuss our detection and processes of anti cheating as it would make it easier for people to abuse the system.”

We reached out to Frontier for further comment, and they simply pointed back to those two statements. The community hasn’t been satisfied by those relatively vague responses, but it seems this is as much information as Frontier will be providing for now.