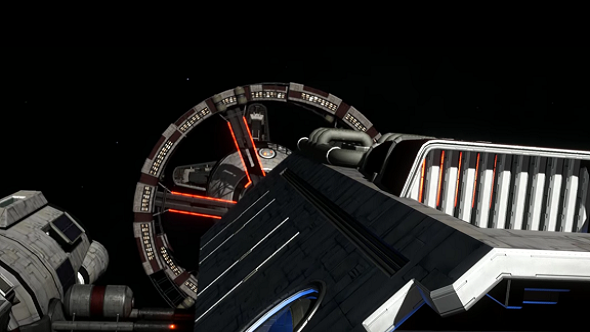 Explorers in Elite: Dangerous have found a derelict megaship deep in space. Its discovery begins to answer questions that have been hanging over the community for three years. Frontier sure know how to build intrigue, huh?

It turns out that thing was a hulking megaship, which a group of dedicated players, The Children of Raxxla, have hunted down by following a breadcrumb trail of hints – from abandoned satellites to vague directions. Of course, it wasn’t possible to find until now, since Frontier only added in megaships with the latest update.

The ship, the Zurara, had no life onboard when discovered, but there were some audio logs that were still accessible, some of which contained the voice of Rebecca herself.

Some dark stuff went on aboard, with a mind-altering substance turning the crew into crazed killers. The smart money is on a cover-up operation from the galaxy’s fattest cats. This being Elite, it’s probably something to do with aliens, right?

Well, we might find out more in the sequel to Elite Reclamation, Elite Premonition. The book is being penned alongside in-game developments, with player actions steering the fiction. It’s pretty cool, if you ask me. See the mystery be discovered in the video embedded at the top of the page.