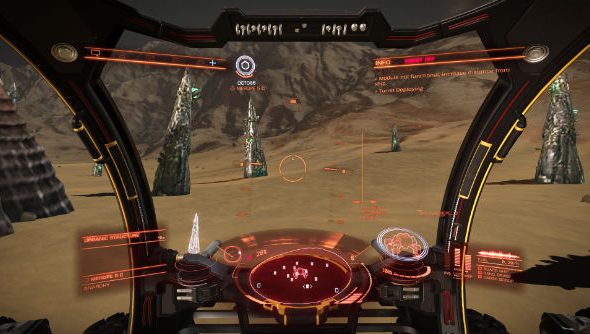 Last year, Frontier’s David Braben made an offhand quip about the existence of non-celestial objects in Elite: Dangerous that no one had discovered since the launch of the game’s version 1.2. Naturally, the community was whipped into a frenzy before it sought to solve the intricacies of a full-on ARG, covering the game’s solar system from corner to corner. Today, one Commander Octo uncovered its elusive Space Barnacles.

Blast off into our list of best space games on PC…ahem, that sounded less crude in my head.

So, after Braben’s tease last year, the Elite: Dangerous community eventually discovered a mysterious ‘Unknown Artefact’. Stumped by what it meant, Elite: Dangerous’ producer weighed in, telling players to listen to the item. A strange recording was made but no conclusions were drawn – irregardless of the belief it all had something to do with the Thargoids – the insectoid aliens from past Elite games.

To add fuel to the rumour mill fire, a chap named Commander Octo has discovered the much-rumoured Space Barnacles on Merope 5C – some 150 light years from where the Unknown Artefact was found. Since, many-a-traveller has headed to Merope to see for themselves, where a fellow named semtexzv recorded the barnacles emitting these distrubing noises (skip to seven minutes onwards for the creepiest section):

Once again, though, we’re left asking the question: what does it all mean?