Update June 23, 2017: Since publishing this article yesterday, Elite devs Frontier have informed us that the issues with the profanity filter reported by their community were fixed in an update on April 25. Confusion arose when a QA tester mistakenly responded to an old bug report. The story has been edited accordingly.

Orginal story, June 22, 2017: It’s a game that features slave trading and genocide, but it draws the line at rude words. Elite: Dangerous has a swear filter, it applies to your ship names, and for two weeks in April, it was stricter than Helen Lovejoy’s Amish cousin.

Potty-mouthed captain Ithilessilposted a complainton the Elite: Dangerous forums after he tried to name his ship ‘Hello, World!,’ only to find that the swear filter had caused journal entries to rechristen it ‘****oWorld.’ That’s right – the filter even stripped out spaces and punctuation in its zeal for clean language.Kerrijahas an equally funny story of a friend who had to rename his ship ‘Moby Richard.’

The filter’s apparent fanaticism led to a mix of confusion and annoyance on the forums, with userDortmundertaking the prize for best rejoinder by posting an image of the game apparently breaking its own rules: 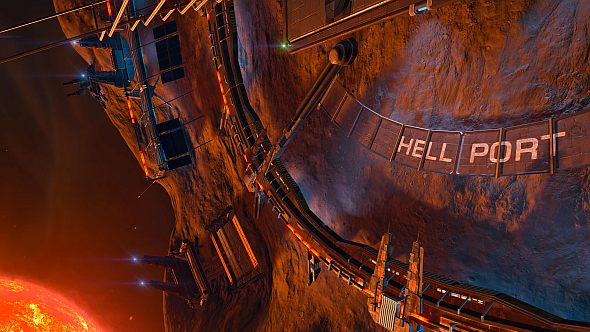 It seems, however, that we’ve all mistaken puritanism for innocent error; Frontier have informed us that the inclusion of ‘Hell’ (and ‘Hello’) in Elite’s swear filter was a bug introduced on April 11, after the game’s 2.3 update. The issue was fixed in the 2.3.0.1 update on April 25, just days after Ithilessil first reported it. The swear filter is still in place but it no longer picks up on innocuouswords.