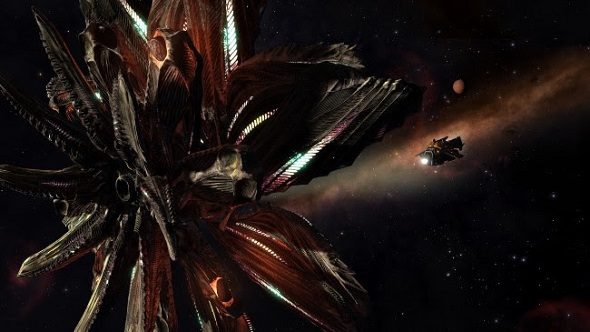 Frontier announced today that aliens were coming to Elite: Dangerous before the end of September, in an update dubbed “The Return.” Everything we’ve seen from the race known as the Thargoids to date has been relatively harmless, but the giant green spaceship is about to hit the fan.

Check our list of the best space games for more.

“These aren’t normal ships. It isn’t a normal enemy. It’s not normal technology,” lead designer Sandro Sammarco tells us at E3. “We’re not really ready for it. We don’t know much about them.”

Of course, humans have made contact with Thargoids before in the Elite mythos, but it didn’t go well for us. Most who encountered them didn’t survive, so all that’s left is ghost stories, beacons pinging in the endless black. Facts have been covered up by shady corporations with hidden agendas, history has been erased. The Thargoids are truly alien, then – their intentions unknowable.

“We wanted to do aliens right,” explains Sammarco. “Elite’s always been about a very plausible galaxy – it’s a 1:1 replication of the Milky Way. Although it has fantastical elements, wherever possible, we base them on science. That’s a core element. Players won’t understand any of this at the start. [The Thargoid are] the Bogeyman, and they are going to be a real horror story. But there is a method to our madness and you can see that in the long period we spent building it up.” 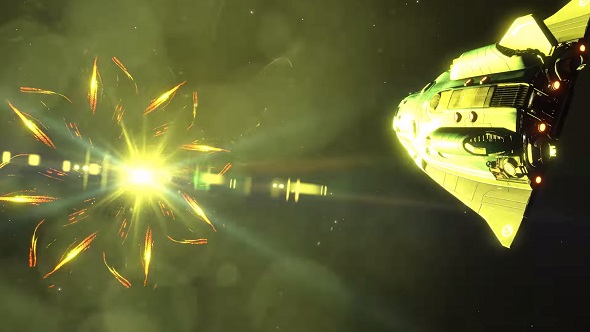 If you haven’t been following, Thargoids have been teased in the space sim for months, beginning with some planet-bound barnacles. These strange organic constructions seemingly drew energy from planets, but players couldn’t uncover for what purpose. Explorers also found crash sites, and more recently the bravest commanders have had scripted encounters with colossal ships. The most recent encounter was on a planet, in which we saw these hulking craft sucking energy from the barnacles.

In 2.4, the threat will be tangible. Players will be taking on the aliens directly, though it will be up to the individual how they want to interact. Perhaps they won’t engage first, or maybe the terrifying audio design will cause them to zip off into the black as fast as their frame shift drive will take them.

“The alien aspect – we’ve tried to run it all the way through from the look and the audio all the way through to the flight model,” Sammarco tells us. “They’re ships. They’re still ships, but the way they fly is not really the same as the way human ships work. Equally importantly, their weaponry, their technology, it’s wholly alien – so expect some interesting weapons to be deployed against commanders who come up against them.”

Commanders will need to come up with new tactics if they want to take them on. Human weaponry wasn’t built to tackle this threat, so humanity will be on the back foot. Of course, this is just the start of a new narrative thread for Elite, so expect the scales to tip at some point if it does devolve into war.