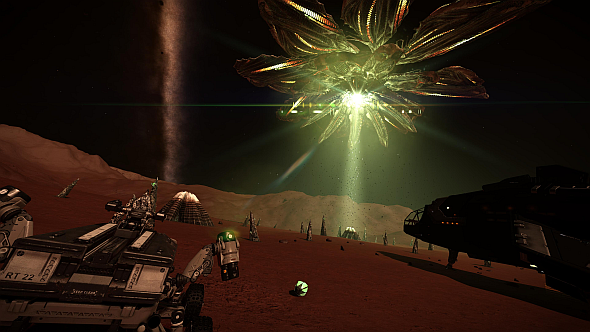 The fungal-like Thargoid aliens have been slowly becoming a part of the Elite: Dangerous universe since release. As part of the 2.4 update released last night, all-out war has started. The Thargoid ships are showing up, destroying NPC fleets, scanning them, and then bugging out. Player weapons are still useless against Thargoid shields.

It all kicked off last night, and the video above shows just how quickly things go from ok to extremely bad. Since discovering that it’s fairly easy to find a Thargoid ship hanging out with some wreckage, various players have been experimenting with what they can do to it. Outright combat seems pointless, but one player did manage to break off a piece of the hull and get it inside their ship… Where it immediately started to corrode the ship’s systems. Yeah, they’re not nice.

Other experiments have involved trying to give the Thargoids things as a peace gesture. It’s gone better than you might expect. Depositing meta-alloys, or even escape capsules filled with NPCs, into space. The Thargoids will then scoop them up and continue on their merry way – which is extremely pretty, by the way. One group encountered a bugged version and got some close ups, though it eventually left. The encounter was livestreamed.

What does it all mean? Well, there’s an ARG of some sort going on, with pilots trying to decode numbers that flash up on the screen whenever you scan a Thargoid vessel. They don’t know if they’re actually going to get anything out of it, but they’re going to try. Elsewhere in the galaxy, giant barnacles are appearing on planets, too. It’s all gotten a bit messy:

Expect Frontier to continue to roll out updates as players discover more bits and pieces around the galaxy. Investigations are ongoing over on Reddit.