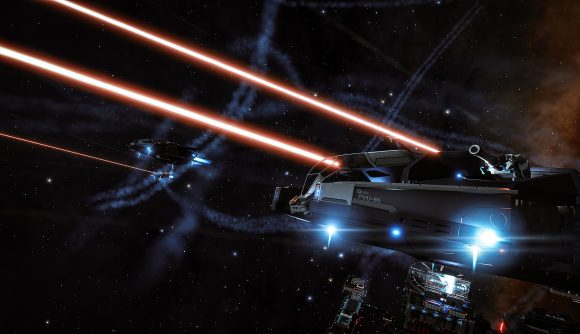 Yesterday was the 30th anniversary of The Cure’s ‘Disintegration’ – the critically acclaimed eighth album by the seminal English rock band, and their best-selling record to date. As it turns out, The Cure would unwind from their hectic schedules by playing the original Elite – until the addictive game threatened to become a fatal distraction and had to be banned.

The anecdote is straight from the memory of The Cure’s keyboardist Roger O’Donnell, who reflected on making Disintegration in this diary (via Rob Manuel on Twitter). O’Donnell writes:

“There’s a lot of waiting around in studios when you have nothing to do so playing games on the computer became quite addictive. We played this space trading game where you made money and bought stuff for your spaceship, like automatic docking and shields and weapons. I can’t remember what it was called now (Elite), but eventually it was banned from the control room as it became a bit distracting, especially when Dave [presumably David M. Allen, The Cure’s producer] was spending as much time on it as we were.”

The article is a lovely read – both an insight into the process of making an album and a trove of fun anecdotes. These include a hyper-competitive table tennis tournament and using “Lol [Tolhurst]’s brand new computer, that we made him buy, to draw obscene pictures of him on and then pin them on the wall.”

You're not going read detail like this anywhere else. The recording of The Cure's Disintegration was interrupted by playing the computer game Elite until they banned it. pic.twitter.com/QIU9MF3PFZ

Apparently Tim Burton had also asked lead singer Robert Smith if The Cure would do the Edward Scissorhands soundtrack, “and the script was lying around the studio”, but O’Donnell says “I don’t think we knew who he was at the time.”

Related: Elite: Dangerous is one of the best space games on PC

But The Cure weren’t the only gamers in ’80s music. Elite creator David Braben – who still works on its modern successor, Elite: Dangerous – also shared that Wham! played Elite in the back of their tour bus:

Now I have a mental image of George Michael and Robert Smith each ferrying cargo around the galaxy in spaceships as they themselves are ferried from city to city in tour buses. It’s a nice image.