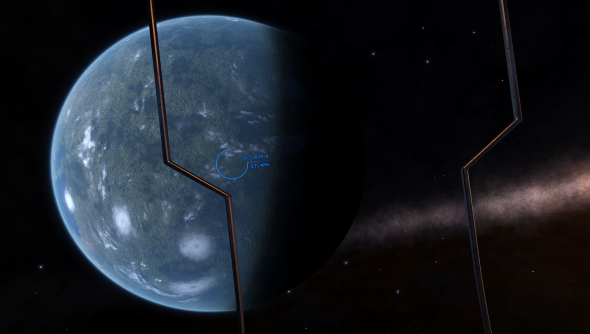 About 470 light years away, deep in the Lyra constellation, is an exoplanet a little larger than Earth. Kepler 438 b is a Goldilocks planet; it’s not too big, too small, too hot, too cold, or too anything to stop life from existing there. It’s just right.

It’s the most Earth-like planet we’ve found in the universe.

Its discovery was announced by the Harvard-Smithsonian Center for Astrophysics on Tuesday. By Thursday Frontier had added it to Elite. You could fly out there right now if you lliked.

Elite Dangerous’ universe has been constructed to resemble our own as closely as possible. Every star astronomers have discovered and logged has been included in Elite Dangerous, and you can fly to them all. As new planets and stars are discovered Frontier will keep on adding them into the game.

You can see Commander Nutter do a fly-by of the planet in this video:

The team also added Kepler 442b. But, unfortunately for the popularity-craving exoplanet, 442 b doesn’t share the same Earth-like qualities as 438 b.

Frontier added the exoplanets into the 1.04 update that went live yesterday.

Frontier’s also changed how matchmaking works: if you’re playing publicly you then other players will be loaded into your server if they’re in the same system as you. This was already meant to be the case but problems with detecting other players in your region of space meant that Elite’s solar systems often felt quite empty – a criticism Steve made in his Elite review.

Here are the other fixes introduced in the update: