Credit where it’s due: I was mistaken about Empire of Sin. Doubts festered during the game’s preview stages, as while Brenda Romero is fascinating to talk to and has assembled a knowledgeable team at Romero Games, I struggled to escape the impression that they just wanted to make a game about gangsters with some strategy parts tacked on at the end.

I was wrong; Empire of Sin is a pretty fascinating sandbox game about running a crime syndicate in Chicago. The tactical layer is smart and satisfying (up to a point), and the strategic layer features a living world that can be quite fun to watch unfold (again, up to a point). And yeah, it’s a game about gangsters: you can tell a lot of love was spent bringing the theme to life in all areas.

While my fears about the game’s design were unfounded, there are other flaws beneath Empire of Sin’s legitimate façade. An underbelly of bugs, odd behaviour, and gameplay loops that don’t quite scale with time prevent it from fully living up to its potential. This is a good game, but it could use a little more love still.

If this is the first time you’ve read about Empire of Sin, a quick summary is in order. Set during the height of prohibition in the 1920s, you get to pick one of over a dozen historically authentic crime gangs and attempt to become Don or Donna of Chicago. The boss of that gang is a larger-than-life criminal either inspired by or based directly upon those who existed in real life, such as Al Capone, and your personal avatar on the map. You can walk around as him/her, collecting quests and engaging in skirmishes. 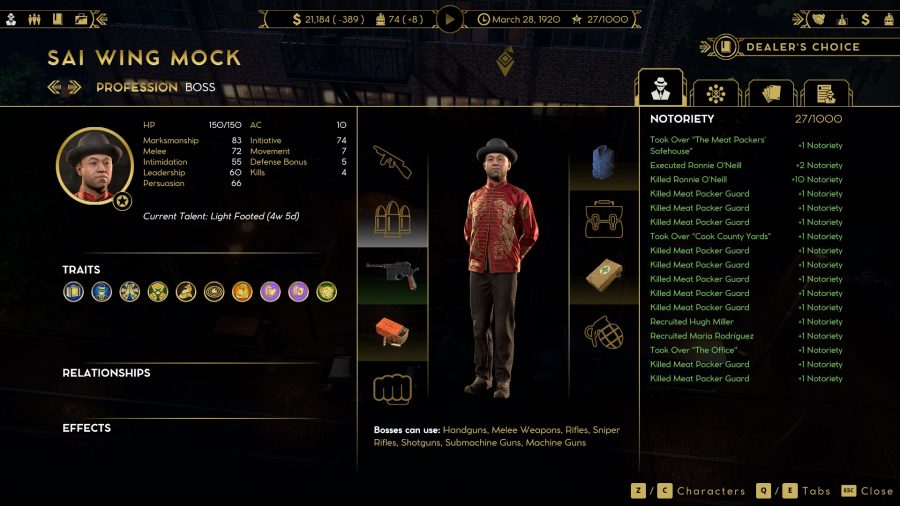 The bosses are powerful, with their own unique skill trees, and you’d be surprised how much you can accomplish on your own in the early game. Soon, though, you’ll want to hire some more muscle to join you in a ‘squad’, though they can be quite expensive.

The strategy layer is where the real magic lies: full of smart and dynamic systems

You fund such investments by developing your empire of sinful rackets: speakeasies, casinos, brothels, and of course secret breweries to fuel them with alcohol. The strategy layer divides Chicago into a number of historical districts (the number can vary depending on your game setup with a minimum of three), in which derelict buildings offer ideal locations for a new racket. Many are held by rival gangs, but some are ready to steal from NPC thugs, and others still may be bought without a fuss. The costs vary, and the cheapest way of expanding your empire is to take over someone else’s racket.

Empire of Sin is a real-time sandbox. Each boss has a tailored core quest chain, but plenty of side quests pop up around the map for you to tackle at your leisure. There are many choices to make, and the game does a good job of keeping repeat playthroughs feel fresh even in the same non-core content – even your crew members will each have their own personal quests to follow. The strategy layer can be viewed in one of two ways; a very top-level view which abstracts the world into an architect’s model of the city made of white buildings, or you can zoom in to see the streets rendered in full 3D. 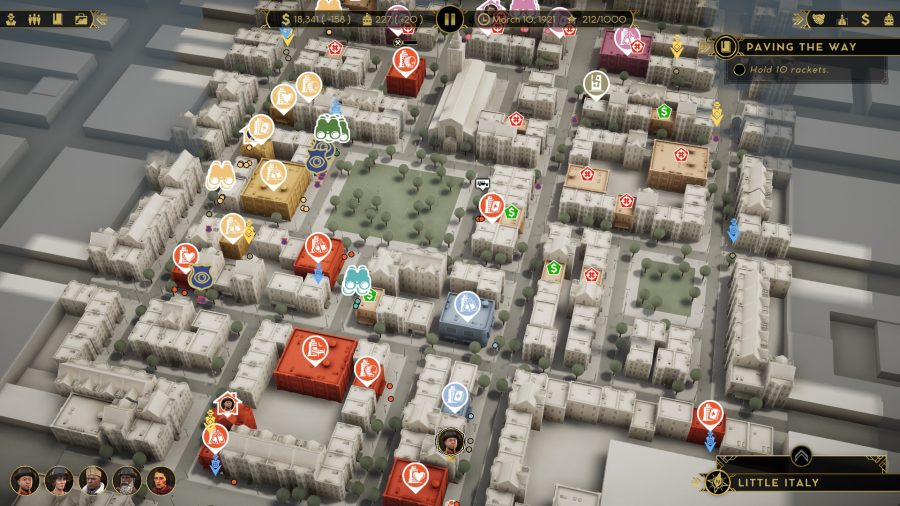 The 'sit downs' between gang bosses are a key pillar of the game's RPG and character. There could be any number of reasons why your boss avatar and another major crime boss might want to meet.

In the early game, when you first meet the other factions you can sit down with them to introduce yourself and work out a casual business deal - which will usually reduce some operating costs - but you can also end up sitting down with them after attacking them, or negotiating the end of a gang war.

You can tell a lot of love went into these, but sometimes they can be a bit of a bore. The dialogue options as well don't always seem to carry any meaning.

If you meet too many factions at once, you'll be running around town conducting A LOT of meetings as ignoring them seems to only lead to them raiding you, which in the early game can be problematic.

The former view is better for highlighting points of interest and getting a holistic view of the district, but the latter adds some essential personality, with people and cars travelling all around you – I’ve also found that it’s almost always raining.

This strategy layer is where the real magic lies, because it’s full of smart and dynamic systems. Squads of gangsters roam the streets doing recon, or heading off to perform a hit somewhere. The cops will do the rounds, both walking the beat and actively investigating your ‘business’, perhaps even raiding your rackets depending on how heated things have gotten.

This can lead to tactical battles inside buildings or out on the street, which follow a very predictable pattern in terms of the maps you get, but what’s great fun is that you can also initiate fights anywhere on the strategy layer. The game will take the slice of map around you and slap a grid on it and – voila! – you have yourself a skirmish map. Anyone in the vicinity will get pulled in, so besides yourself and your target you might drag a policeman in, or some thugs from a neutral gang. Timing is key, because those cops can and will mess you up something rotten. 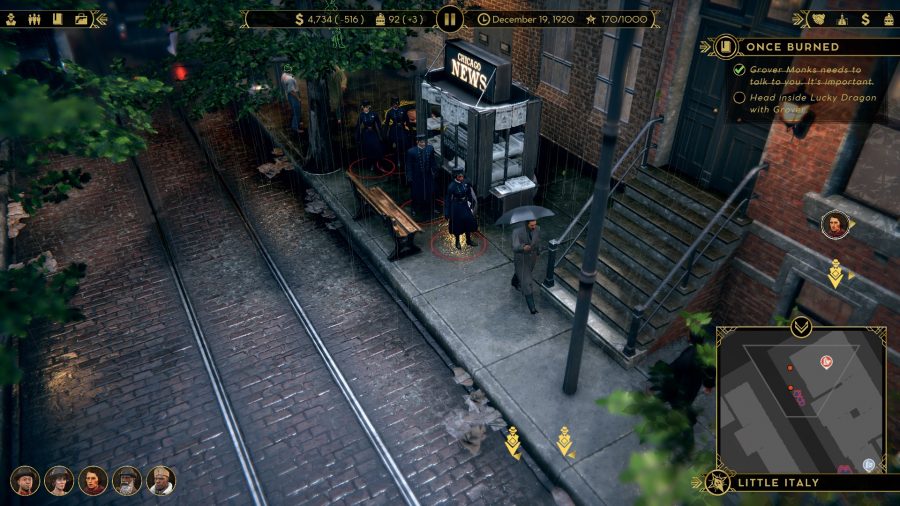 The tactical layer in general is no slouch. It’s not quite XCOM, but it’s also come a long way since I last got my hands on it. Gangsters can be equipped with primary, secondary, and melee weapons, and each non-boss has a skill tree defined by their class. Characters get two action points per round, which can be spent on moving, attacking, or using abilities, each of which has variable AP costs depending on how good it is. The bigger machine guns, for example, require 2 APs just to fire, whereas if you don’t want to move you can take two shots with a pistol. Extra abilities add tactical variance: everyone’s favourite ‘run and gun’ makes an appearance, for example, and medics get an end-tier ability that can give other squadmates an extra AP along with a health boost.

The tactical layer is smart and satisfying, and the strategic layer features a dynamic, living world

I’ve had a lot of fun toying around with early-to-mid runs with a variety of gangsters. There are clearly systems in place for the long game; the amount of money it takes to bribe the police is quite frankly staggering, as is both the up-front hiring cost and monthly fee for the top-tier gangsters.

I’m concerned about Empire of Sin’s ability to hold your interest that long. It’s unclear how long the faction-specific mission chains last, and outside of that core narrative you’ll just be dealing with the same pool of side quests, gang wars, and slow but steady expansion across the city. As you expand into new areas you’ll need to promote some of your crew to oversee operations on your behalf, freeing up a slot for a new hire. There is apparently some kind of mole meta-game, but I’ve yet to see it in action. 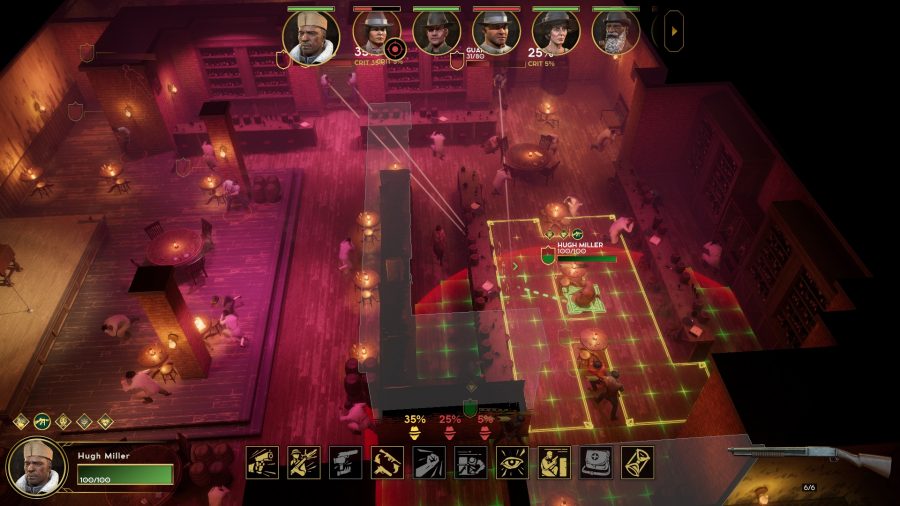 But the game’s sandbox design and the way it can generate tactical battles almost anywhere means that, eventually, these skirmishes become a bit rote. Indeed, by the time you fight fully fledged gang wars, running around your territory with your squad and fending off aggressors from all sides, they can feel dangerously like actual work. You don’t get any room to do anything else, especially as tactical battles can be fought (and must – there’s no sign of a way to skip or auto-resolve them as of yet) regardless of whether you’re there ‘in person’ or not.

There are other concerns beyond just a potential lack of engaging mid-to-late game content. We were given a list of known issues with the game, and also forewarned that even though our review copy included the ‘day one’ patch fixes, there would be a ‘day seven’ patch as well to address further issues known (and found in the first week).

I could tell you about any number of things that went a bit squiffy during my time: the Frank Ragen missions stopped progressing after I’d done the first one, for example. I’ve had gang members randomly disappear on me, even though they show as still being part of my crew. Some tactical encounters failed to trigger, preventing me from starting further skirmishes elsewhere, and I’ve also had one weird instance with the Hip Song Tong storyline where, when loading from my safehouse into the street outside straight into a fight, not everyone seemed to spawn in time to participate. Few of these issues seem to match the promised fixes in the new patch, but that’s not to say fixes won’t happen at all. 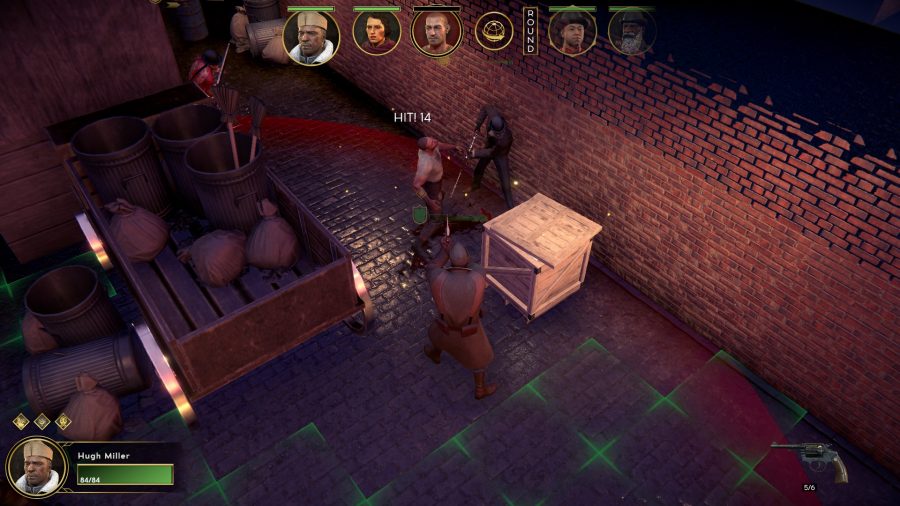 All of this is to say that – at the time of writing – Empire of Sin is in a fundamentally fun but funky state. The game’s launch build is reminiscent of a past era of Paradox when its games had a lot of vision and personality, but lacked the technical polish required for them to truly shine.

It’s worth stating though, Empire of Sin manages to strike a balance between decent turn-based tactical skirmishes and a meaningful ‘big picture’ strategy layer, which is no easy feat. It doesn’t get everything right, but this is an impressive start, and the foundations are solid. A racket-full of bugs has caused me any number of reloads, yet I’m still compelled to come back to watch the denizens of this living world scurry about.

Ambushing an enemy squad or rolling over a racket in seconds is quite satisfying, and there is yet more I haven’t had a chance to mention – such as managing your rackets or what happens when you linger too long any one building. Though the tactical combat grates after a while, there are plenty of little moments that maintain this game’s allure, like that grimy, imperfect dive bar you just love to keep going back to.

It's hard to ignore the need for a little extra TLC to smooth out the edges, but the fundamentals of an arresting tactics-and-strategy game about building a criminal empire are in place.