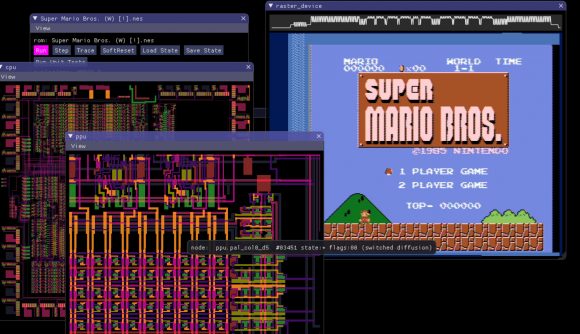 PCs have been capable of running very playable versions of NES games for decades via emulation. But while emulators have practically become indistinguishable from the real thing for many players, they can always become more accurate. That’s why MetalNES is replicating the functions of Nintendo’s classic console at a transistor level – a process that’s far too much for your PC to handle.

MetalNES is the creation of Icer Addis, who’s already well-known in the emulation scene as the creator of NESticle – a very popular NES emulator originally released in the late 90s. As explained in the GitHub release, MetalNES is a “transistor level NES-001 simulation”, meaning it simulates the actual physical characteristics of the hardware itself, right down to the voltage flowing into the parts.

NES emulators already replicate the hardware at a fairly low level, but going for full transistor level emulation is an order of magnitude more complicated. The emulator is currently only available for macOS (“for now”), so I haven’t had the chance to try it out for myself, but early reports from users say the emulator is able to render a frame or two in the space of about two or three minutes, based on the power of your hardware.

Yes, we’re measuring not in ‘frames per second’, but in ‘minutes per frame’. MetalNES is effectively useless as a way of playing games right now, but it’s a fascinating experiment, and could serve as a way to help future NES emulation get even better.