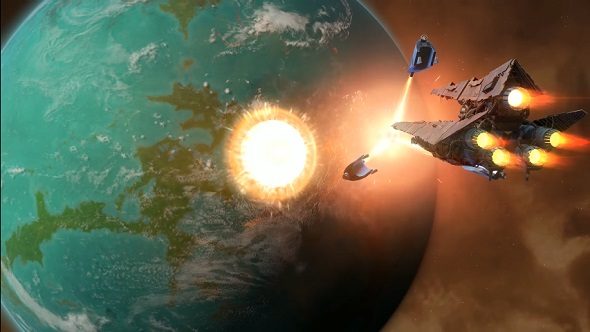 As players start venturing out into the vast universe of Endless Space 2, developer Amplitude Studios aren’t finished with their video series about the main mechanics of their space empire builder. Rather than focusing on economics or politics, this video shows what life is like for players who want to be a ruthless interstellar warmonger.

Check out what we think of Endless Space 2 with our review.

While diplomacy is helpful, there will be some moments during your galactic conquest where war is inevitable. A combination of clever tactics and powerful technology is key to victory, as just having the biggest guns and chunkiest shields won’t beat an enemy who is thinking three steps ahead of you.

If you are really struggling against another empire, you can hire special hero units to act as the admiral for your fleet. These pilots bring with them a selection of special skills and their own unique flagship, usually built for a certain task like infiltrating an enemy fleet or soaking up damage.

At the start of each ship battle in Endless Space 2, players can formulate special strategies to help overcome the opponent’s fleet. You can reposition your ships into specific flotillas too, so you can place that offensive hero at the front of your newly designed bomber squadron for example. Once you have locked in your battle commands, you can either skip straight to the final results, or watch the skirmish in real-time. You cannot directly affect the outcome of the fight once you’ve picked your strategies, so just sit back and watch the plasma fly.

Right at the end of the trailer, we see a Craver ship firing off one giant laser blast, hoping to crack a planet in two. This planetary destruction module has just been added in the 1.0 release of Endless Space 2, so be wary of enemy ships looking to blow up your homeworld. Based on how devastating this module is, expect it to be at the very end of the Galactic Warfare research tree.