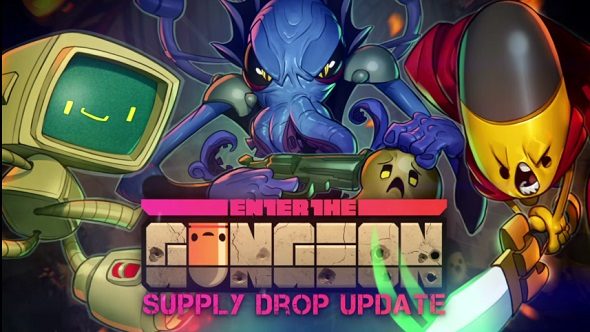 The Gungeon’s chambers are rumbling back into life, as Dodge Roll Games have released a brand new, free update for their bullet hell roguelike, Enter the Gungeon. This update adds 33 new guns and items, an extra boss on the third floor named the Mine Flayer, as well as new enemy types, item synergies and much more.

For more top quality indie games, check out our list of the top 15 best PC indies.

The new guns that are now in the Gungeon are pretty bonkers, including a massive Satellite Laser which disintegrates anything it touches, a gun from fellow indie game STRAFE and the Bullet Gun, which is a giant bullet that fires guns, which in turns fires bullets. Dodge Roll are nothing if not creative when it comes to crafting new weapons.

There are now additional alternate costumes for many of the game’s characters, three new Achievements to unlock and a special Challenge mode for those who want to brave the Gungeon’s deadliest trials. With the later levels of the base game being hard enough as it is, I can only imagine the hellish gauntlet that awaits if you attempt Challenge mode.

For the entire list of balance changes and quality of life improvements, make sure to check out this post over on the Enter the Gungeon Steam forums, which goes over the minutiae of weapon and item tweaks. The Supply Drop update also adds a Simplified Chinese language option, but consider it to be in beta at the moment, as some of the translations still need fine tuning.

Enter the Gungeon is currently 50% off on Steam this weekend to celebrate the release of the Supply Drop update, costing $7.49/£5.49. If you are on the fence about delving into the Gungeon’s depths, now is the time to take the plunge.