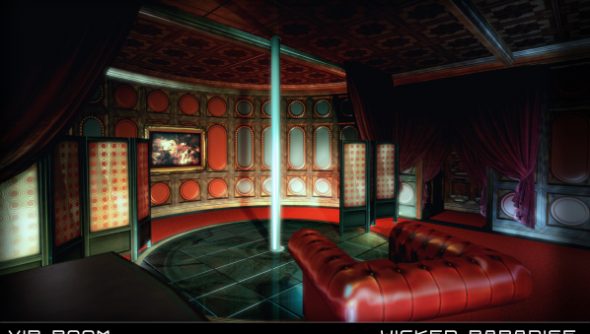 Wicked Paradise’s founder,Jeroen Van den Bosch, answered my questions via email about what he wants to achieve with his games. Wicked Paradise seems to be in very early development of their content – just the test stages really, so currently it seems that developers are just forming ideas about what they want to do with the new technology. So far screenshots have very heavily indicated that women of a certain type will be a focus of the experience.

Jeroen Van den Bosch:It was a combination of two things. First I always found it intriguing that there are so many beautifully crafted shooter games on the market, but not a single, well designed adult videogame, so I always had this idea of creating a high quality adult video game. Secondly, I had the chance to test a very early prototype of the Oculus Rift last summer and it blew me away. I immediately realized that Virtual Reality is the perfect medium for a highly immersive adult videogame.

Jeroen Van den Bosch:For a large part it’s because some of the most veteran game developers in the industry have been doing the same thing over and over. After years of modelling guns and soldiers, I can imagine why a lot of them are really wanting to do something different. But it’s also simply the fact that Virtual Reality is really something that sparks people’s imagination, and game developers are all very creative people so their imagination is running wild since the Oculus Rift got announced, they really want to get involved in this.

Jeroen Van den Bosch:We are going to develop different experiences for different audiences. Our goal is to cross uncanny valley so we are using the most advanced techniques from the videogame and movie industry in order to get the characters and environments as realistic as possible.

PCGN:Will narrative be important? Are there pop culture cues you are looking at?

PCGN:How do you playtest this game? Is there a specific reaction you or the developers are looking for?

Jeroen Van den Bosch:We are currently in pre-production, experimenting with different techniques to see how we can achieve maximum immersion with the current technology. So playtesting is not on the menu just yet. 🙂

PCGN:Is this specifically targeted at a straight male demographic?

Jeroen Van den Bosch:Wicked Paradise will be episodic, much like the brilliant videogame The Walking Dead. The first series will be from a hetero male POV, but we’ll have different series that cater to different genders and sexual orientations, it’s our goal to ultimately have Virtual Reality experiences for everybody to enjoy.

PCGN:Will there be games for other sexualities? What do you have in store there?

Jeroen Van den Bosch:Definitely, we actually received more inquiries about Wicked Paradise from females than from males, so it’s our intention to also create mature virtual reality experiences from a female POV as well as experiences for the LGBT demographic. 🙂

Thank you for your time, Jeroen.

Here’s an animation test from Wicked Paradise: it features a lady.

A person called ‘Zain’ has commented on the video, saying, “day one buy for me but the boobs gotta be more realistic and more enhanced graphics would be a guge plus but until now it looks fantastic”.