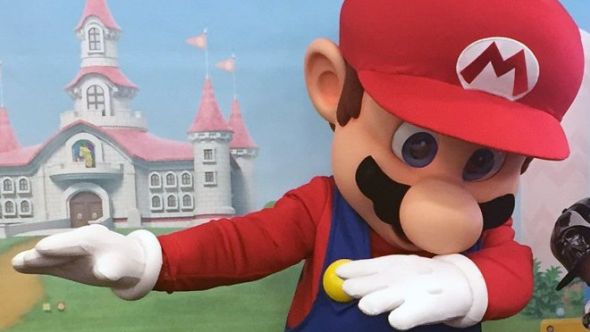 Every day we stray further from God’s light. Thanks to ESRB, the company that decide the age ratings for all your favourite videogames, Twitter has been filled with images of characters from Doom and Overwatch, as well as the Mario franchise. This would normally be fine, but this time around, they’re all dabbing. Yep.

To distract you from the terrible world we live in, check out our list of the best games on PC.

It all started this morning, when Twitter user @pyrocatheter tweeted the ratings company, asking them to “please ban dabbing from videogames.” An honorable request.

ERSB replied, saying “We don’t ban things. That said, we’re in the process of developing disclosure materials for #dabbing. We are hip.”

Apparently, that was enough to spark a thread dedicated to the greatest dabs in videogame history. It didn’t take long before the official Nintendo, Doom, Sonic the Hedgehog, and Mega Man accounts piled in, showing off all of their characters’ sickest dabs.

Twitter being the hot mess that it is, this was quickly followed up with a bunch of more amateur attempts. Overwatch’s Zarya, Danganronpa’s Hajime, and even Gregg from Night in the Woods all feature.

What about a gay fox dab ? pic.twitter.com/HJfRjuCI6A

If you want to check out the whole thread, then that’s on you. It’s an absolute dumpster fire of bad memes and questionable dabs, but it’s here if you really have to see it.