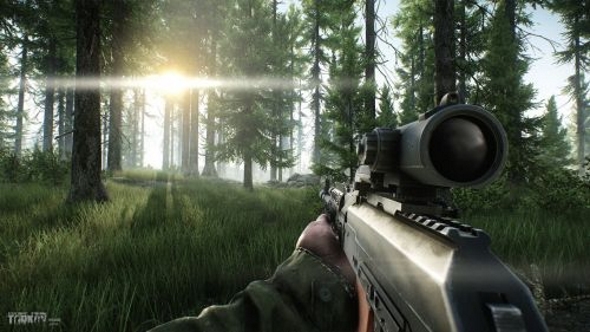 FPS/MMO hybrid Escape from Tarkov has entered an ‘extended alpha’ phase, meaning new features have been added, and more players will be accepted to the alpha test.

Do you do your best shooting with other humans? Check out our list of the best co-op games on PC.

New additions to the extended alpha include:

Escape from Tarkov blends a Clancy-esque tactical shooter with a story-driven MMORPG. The titular Tarkov is the game’s setting; a Russian city sealed off by roadblocks as a result of a political standoff between east and west. It is now caught in a chaotic conflict between opportunistic mercenary companies – basically, think The Division, but with more realistic damage. More details are available on the game’s website.

Sound good? If you’d like a crack at it, you stand a better chance at getting into the alpha if you pre-order, and an even better chance if you pre-order a more expensive package. The most expensive Edge of Darknesspackage (€109.99, loads of stuff and a season pass) is a limited edition and guarantees you access to the alpha. The Prepare for Escape package (€79.99, still lots of stuff), gets you a 75% chance of alpha access, while those who buy the Left Behind package (€57.99, less stuff) have a 50% chance.

All pre-orders, including the cheapest Standard edition(€34.99, just a bit of stuff), guarantee you access to the closed beta, which is expected in the near future.