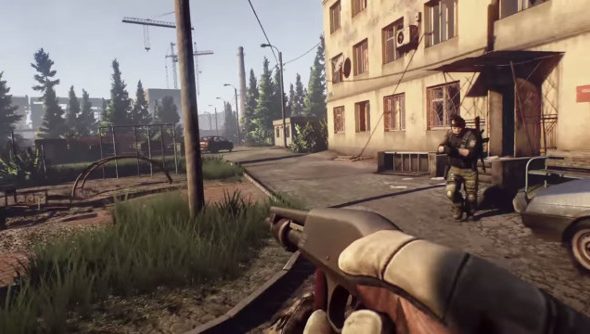 We haven’t seen a lot of open world FPS Escape from Tarkov so far, apart from just how exceptionally pretty it is. At GDC I had a small glimpse of some actual gameplay, but it was more examples of how it might work, rather than a live environment. Battlestate now have the game ready to show off more freely and have done so, with a massive hour-plus livestream on Wednesday, including live gameplay, a Q&A and showing off what’s being added next.

Looking for something excellent to play? Here’s the best PC games ever made.

Have a watch of the full thing here:

It kicks off at 3:08, with actual combat taking place at about 14 minutes in. This also shows off the in-depth weapon customisation system that allows any piece of a gun to be stripped or altered – in this case turning an automatic rifle into a silenced gun.

It’s fairly slow going, and clearly an early version of the game, but interesting none-the-less. Also fairly incredible to see a game that looks this good in motion with such massively open areas at a decent framerate. The no-UI approach is going to be consistent through to the full game too – no ammo counters, no bars. It’s very hardcore and has more than a whiff of S.T.A.L.K.E.R. about it.

A Russian version of the stream was also broadcast slightly before, if you’re fluent.