At this point, STALKER-like shooters are practically their own subgenre. Intense games of crawling around gritty and authentically bleak-feeling eastern european environments, desperately searching for ammo, medical equipment and armor all while trying to put some extra air-holes in your rivals.

MMO shooter Escape From Tarkov from Russian studio Battlestate Games went into closed beta a few months ago, with preordering players let in the door early. Soon, the game will be opened to all, and the real battle for Tarkov city will begin.

NPCs and faction warfare give Tarkov an edge. Could it be the next contender for the Battle Royale FPS crown?

For those who haven’t followed Escape From Tarkov’s development, it’s central gimmick – beyond looking, sounding and moving more than a little like the classic STALKER games – is perma-death. If you die, everything you’re carrying drops with you, no matter how hard you worked for it. Anyone – human or NPC – can swoop in, pick it up and make it theirs. Death comes easy, and so you’ll want to be sparing with what you take from your account-level stash out with you on sorties.

In order to soften this blow, players are allowed to spawn as ‘scavs’ – the local inhabitants of the city, poorly equipped, nondescript and functionally identical to roaming NPCs – giving them some free starting loot, but also any gear brought home alive will be added to your stash to be passed on to your next incarnation. Easy come, easy go, and even the most well equipped badass is still going to die to a couple pistol rounds to the back of the head. 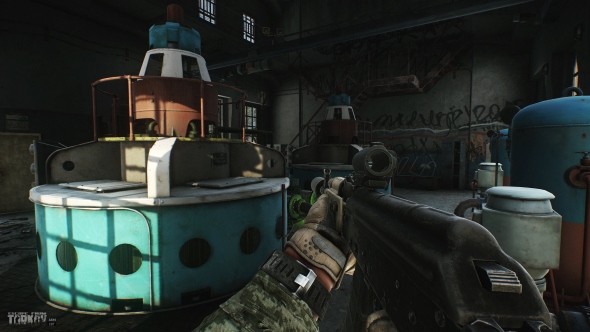 While Tarkov has no reality-warping anomalies or monsters roaming its ruined streets, there are plenty of NPC factions mixed in with the human players, and through the scope of a gun they tend to look almost indisintuishable from one another. Plus, a bullet from an NPC is just as deadly as one from a human player.

As mentioned, the game is currently closing in on its grand public debut, and Battlestate have release a major update to accompany the planned launch. 70 new items have been added to the game, including a variety of guns such as the iconic AKM in both military & civilian variants. They’ve also spent time optimizing the game for lower-spec machines, and have worked on improving NPC AI, who I’ve heard demonstrate decent survival instincts now.

There are also plans to localize the game into most European languages, Chinese, Japanese and Korean in order to reach an international audience. A wise decision, considering the enormous success of PlayerUnknown’s Battlegrounds. Seems that sneaking around a massive battlefield, popping holes in people is popular now.

There’s no hard date for Escape From Tarkov’s open beta locked down yet, but Battlestate say that they plan on launching before the end of the year, so likely within the next 8 weeks or so.

If you can’t wait, you can still preorder bundles of perks to gain access to the Beta immediately, although you’ll have a lot more human targets to shoot once the open beta goes live.