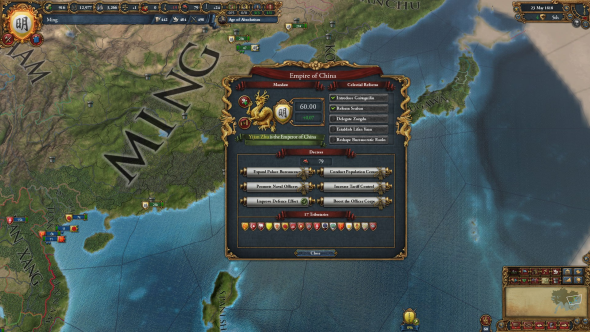 Europa Universalis IV is one of those names that seems like it’s going to be really fiddly and difficult to get used to, but actually isn’t – much like the incredibly accomplished Paradox game it belongs to. It’s a pleasure to see the studio continue to expand on their grand strategy opus with yet another expansion, Mandate of Heaven, out April 6.

Europa is one of the great strategy games of our times.

In just under a month, players will be exploring the possibilities of the new Japanese Shogunate and Celestial Empire. The latter might sound more like a Stellaris feature, but Mandate of Heaven actually introduces the major forces of East Asia as playable nations.

There’s a little more on that at the Mandate of Heaven site-plus the developers will be streaming further details on Paradox’s Twitch channel tomorrow, March 14. That’ll be at 14:00 CET, which is 13:00 GMT, which is 6:00 PDT. Not convenient for everyone – but as ever there’s the option to play it back later.

Mandate of Heaven will set you back $19.99 if you pre-order it now.