Update September 18, 2017: With the heist of a lifetime now fading into memory, Eve Online’s playerbase is turning it into the usual collection of memes to keep it fresh.

What do you do with stolen goods? Eve Online’s The Judge is auctioning them off, starting with one of gigX’s titans, the poor fellow who lost everything, his corporation and his whole Eve account, last week. Meanwhile, songs are being written about the legendary theft.

The song, to the tune of God’s Gonna Cut You Down by Johnny Cash, has been produced by The Ministry of Truth, a propaganda arm of Eve Online’s The Imperium – the benefactors of Judge’s betrayal. It’s rather good:

Meanwhile over on the official forums, Judge is running an auction for gigX’s “personal titan” – flown by one of his alt’s, apparently. Bidding starts at 80 billion ISK, but has rather quickly been overtaken by accusations that the auction is a fake, as well as other, rather more personal comments about Judge. Whether he’ll manage to sell it or not is anyone’s guess.

Elsewhere, players are turning gigX’s ban into the meme of the year. CCP’s normally hands-off approach to community management means the event has generated more interest than normal. For their part, CCP have stated that the case is closed, gigX is banned, and won’t ever be unbanned. Minor dramas arose regarding previous incidents that didn’t have such punishments, to which CCP said policies have changed.

Original story September 12, 2017:Circle of Two, one of Eve Online’s biggest alliances is in the midst of a coup, with one of its leaders, The Judge, defecting to rival alliance The Imperium, taking a tonne of ISK and assets with him.

It’s all happened very quickly at around 02:00 BST on September 12, when a Circle of Two keepstar, a giant space station constructed by members of the alliance, changed ownership to a corporation outside of the alliance. Ownership then changed again to Goonswarm, the main corporation within the Imperium.

Since the transfer of control, Goons have celebrated by writing “LOL” in warp disrupt bubbles above the station:

One of the most significant works of espionage in @EveOnline just went down. Goons write LOL in warp disrupt bubbles over captured enemy HQ pic.twitter.com/KKMhHvycMm

The Judge, who also sits on the Council of Stellar Management, a board of players who regularly speak with Eve developers CCP about the state of the game, admitted on a streamthat he was responsible for the theft and that he had made off with over a 1.5 trillion ISK in in-game currency and assets – including a titan owned by GigX, the leader of Circle of Two.

The exact value of everything stolen isn’t yet clear but it looks like it’s the largest theft in Eve history, the next largest theft tops out at one trillion ISK.

In response to the theft, GigX sent threats to the Judge and tried to get his personal details to publish online. CCP responded by permanently banning his account: 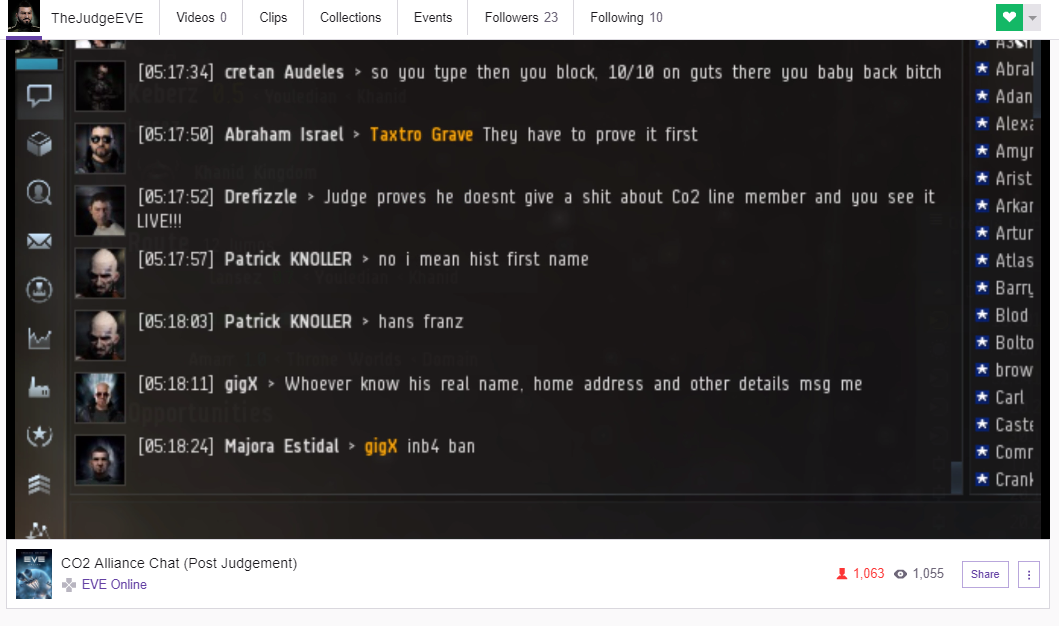 Shortly after the theft, the Mittani, the defacto head of The Imperium, messaged members, saying: “ARYTH AND THE JUDGE SEND THEIR REGARDS – PREPARE FOR A PR- STYLE HELLCAMP – HICTORS NEEDED ON DECK – VENGEANCE – VENGEAAAAAAAAAAAAAANCEEEEEEEEEEEEEEEEEEEEEEEEEE”

Not all of the assets were transferred to The Imperium. The Judge also handed over the keys to Circle of Two’s Fortizar citadels to TEST Alliance, another enemy of GigX’s alliance.

Since the theft, TEST and The Imperium have been encouraging Circle of Two members to jump ship and join their alliance. A tempting offer considering that, since the transfer of ownership, many members of Circle of Two have now been locked out from all the assets they had stored in the alliances citadels.

The Judge confirmed in a Reddit AMAthat he is going to join Goonswarm, as well as admitting that he was paid 300 billion ISK to hand the Keepstar over to the corporation.

In the same post, The Judge explained why he had betrayed the alliance. Despite being with the alliance for five years, his relationship soured following World War Bee, the major conflict that took place earlier this year.

“We lost a number of key members of leadership and most of what was left went inactive,” Judge says. “I will admit, I started to become more and more consumed with CSM duties so I didn’t give as much attention to the alliance itself from that point on, but one reason was more impacting than any… gigX projected his hate of CCP and how they were developing the game onto me. After all, the CSM works with CCP which in most people’s minds makes us close enough to get as much hate as developers themselves.”

The Judge says the alliance had started taking pot shots at other corporations and alliances it was partners with in coalition. “I had asked our leadership to calm down and not blow up our coalition,” he writes. “Good people treated badly. That is something I can’t keep turning a blind eye to. Aryth from Goonswarm offered me an out, and I’m taking it.”

As to the theft, The Judge admits it was because “of how much I’ve put into CO2 and wanting to leave with something to show for it” but also “because gigX needs to let CO2 die and move on with his life. Partly because some of these corps that have been removed deserve some of their effort back themselves.”