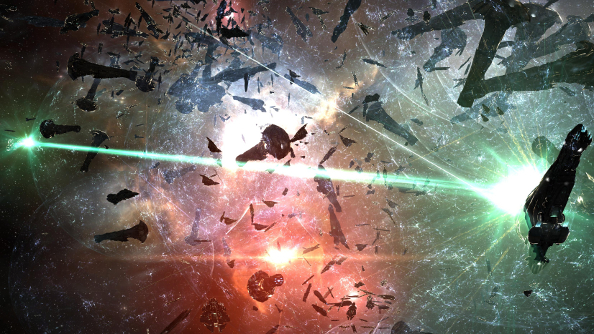 There’s something brewin’ over in Eve Online… something big. It’s been two years since CCP Games’ MMO recorded the largest player battle in the history of games, and though the galactic wars have been decidedly smaller scale since then, recent developments involving a major faction could yet see a new record-smashing space skirmish take off.

All this massive mutliplayer action has got me in the mood for the best MMOs on PC. How about you?

Over on Eve Online’s Reddit forums, user TheRealMartini details recent events that look set to tee up Eve Online for one of the biggest wars in its history. Thanks to a seemingly fresh resentment for The Imperium, the game’s leading clan, smaller factions have been making allegiances and waging all-out war on the dominant faction. Can’t we all just get along?!

According to TheRealMartini, here are the main reasons that have led to Eve Online possibly being on the brink of its biggest ever battle:

Having never played Eve, all of the above reads more like the lead-up to Judgement Day than the complicated politics of an MMO. At any rate, these guerilla scuffles to take down The Imperium have certainly seemed to reinvigorate the game’s community, with a 2000-strong player battle involving the Allied Coalition taking place just last week.

The likes of TheRealMartini are now convinced Imperium suddenly being forced to defend its home systems so desperately in these freshly epic encounters could lead to “the largest battle in gaming history.” With the numbers Eve Online has dealt with in the past, that statement may not be exaggerating. Being entirely too thick to play Eve, I’ll just have to watch on from the sidelines with tiny white flag in-hand.