There is a corner of Eve where, for nearly a decade, players have been leaving memorials to the dead. At first it was to remember deaths of in-game characters but now it’s also used for lost loved ones outside of the game. The sacred space has even been given the protection of Eve’s developers, CCP.

Death is strange in Eve Online. You play as a capsuleer – a clone, essentially – so any in-game death is in fact just a momentary pause before your consciousness is activated in yet another clone stored in a distant planet. One player, Azia Burgi, was unhappy with that callous abandoning of the flesh. It’s why she would collect bodies that she found in space and take them to the first moon of Molea II, where she would anchor them in space.

As word of Azia’s project got out, players began donating corpses to her cemetery. At one point, she had 5,000 corpses backed up waiting to be assigned a plot and anchored in space. 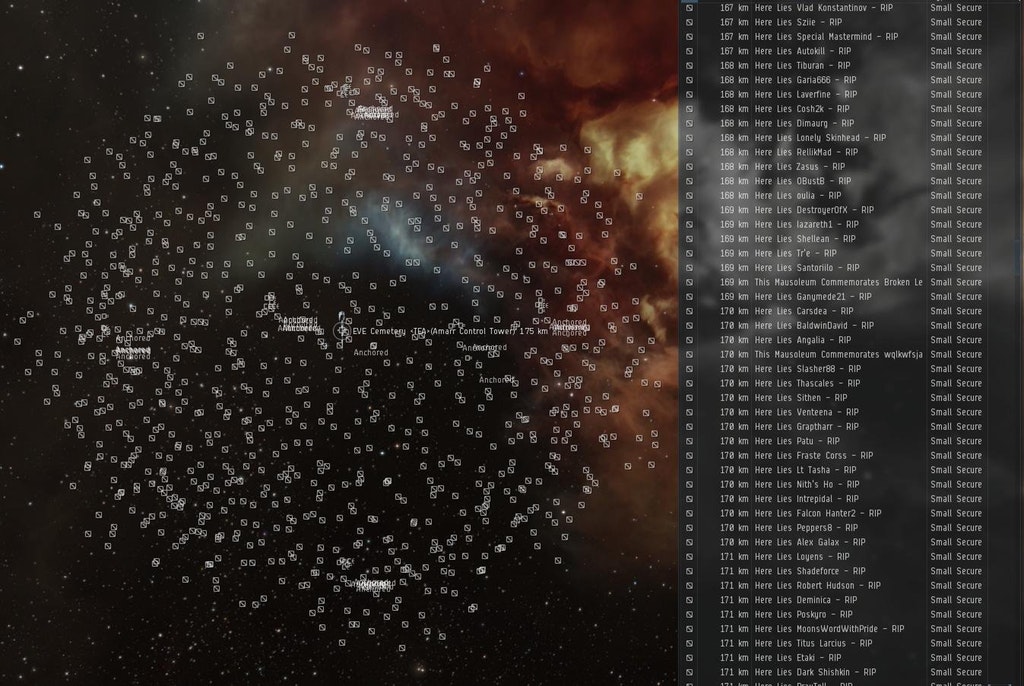 However, the newfound attention wasn’t all good. The cemetery was attacked more than once over the years. A Goonswarm attack in 2008 saw over 800 graves desecrated or destroyed. Azia set up gun turrets in the centre of the space to fend off this unwanted attention.

However, one aspect of Eve’s design means that there’s a transience to the graveyard. Containers anchored in space can only sit static for 30 days before being automatically deleted. These bodies would essentially return to the digital dust.

As the cemetery became a fixture in Eve Online, players began to memorialise not only their in-game deaths, but also people they lost in the real world. The canisters left in Azia’s graveyard were renamed with messages remembering deceased family members and friends.

Seeing how the area around the first moon of Molea II was being used, CCP made the space different from any other in the game, turning off item decay in the region. Now, any canister anchored there will exist until Eve shuts down – if it ever will. As a nod to Azia’s work, items anchored there – no matter who does it – are left in her name.