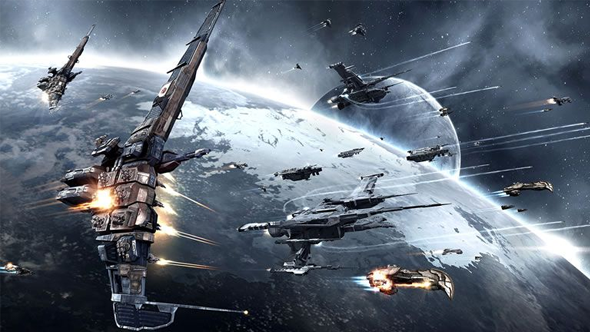 A currently ongoing Eve Online conflict has two massive fleets standing against each other, with the opposing fleets valued in total at over $1 million in real world money. That would make it the most expensive battle in Eve history. The faceoff has already set another record, though, in terms of sheer number of players.

A tweet from CCP Fozzie reveals that 9-4RP2 – the site of the conflict – has set a new record for most players in one system at a time.

9-4RP2 local has now broken the all-time @EveOnline record for most players in one system at a time. https://t.co/VXiUZv3zCF #tweetfleet #MayGodHaveMercyOnTheServer

The number’s already past 6,000, handily beating last year’s record of 5337. Quite a few Twitch streamers are keeping a live eye on the battleground to be as the fleets swarm in, so keep an eye there if you want to see the action as it happens.

Original story, January 23:Eve Online’s cold war may turn hot later today with two of the game’s biggest alliances poised to send close to 250 titan class warships into battle against one another. We might be about to see Eve’s first $1 million battle.

Back in 2016, an army calling itself the Moneybadger Coalition, which was bank rolled by online casino-owner Lenny, swept through the Eve universe, driving The Imperium’s forces from their entrenched positions. The war ended ended in the last months of 2016 with The Imperium on the back foot – not wiped out but it had sustained major losses.

Recently, The Imperium has been making noises of a counter invasion. According a great write up by CSMprogodlegend, 2017 was spent in an arms race, with The Imperium and Moneybadger building up their forces. Today, that build up might come to a head. Both sides have mustered their titan fleets, which collectively are worth more than $1m, and are preparing them for battle.

Whether the two armies will actually engage is up for debate, but, if they do, then we could see the most expensive conflict in the game’s history.