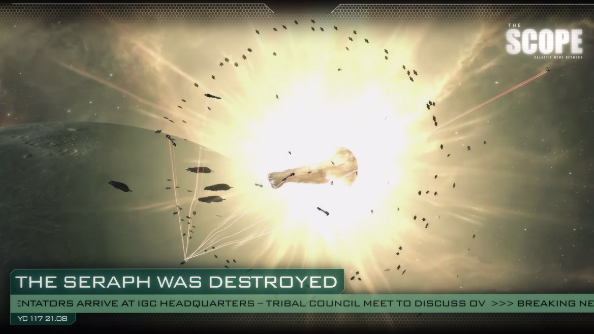 The Amarr Empire is EVE Online’s largest society, and it’s just lost its ruler. Empress Jamyl Sarum I was assassinated last week by Drifters, and now there’s a massive power vacuum. It’s a position that needs to be filled, and the only way a new ruler can be found is through combat.

Thus starts the Succession Trials: a series of battles that will conclude at Fanfest 2016 where the winner of the Amarr Championships will pick the next ruler of the Amarr Empire.

EVE Online is certainly a surreal world to live in, but this kind of player-driven storyline is what makes the MMO so involving. While all this is happening in Amarr space, the Drifters are starting a new war with the Amarrian Navy as part of the new Defence of the Throne Worlds story.

The Galatea update also changes some mechanical features. Animations and effects for combat and support modules, including Doomsday weapons, have been updated. The Killshot camera has been improved and will now linger over your target just a little longer to allow you to bask in victory. The Dominix ship has been redesigned, and the first Designer SKINs have been released: find the red “Raata Sunset” at New Eden for Caldari ships.

The full patch notes for the Galatea update can be found here.