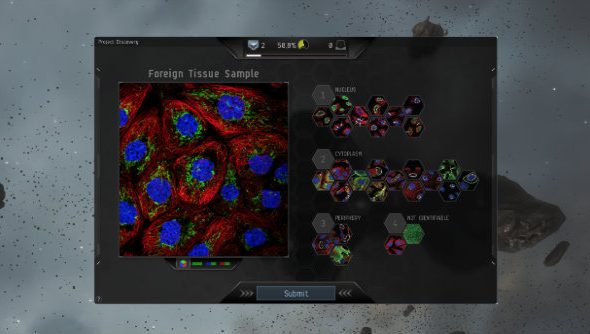 The thousands of solar systems within New Eden are now more than just a game, they are contributing to real-world scientific research in a collaboration between CCP Games, the Human Protein Atlas, MMOS (Massively Multiplayer Online Science), and students from Reykjavik University.

While these can’t all boast the same features, our list of PC’s best space games will take you into the stars.

Project Discovery lets the hundreds of thousands of Eve players earn in-game rewards by helping to classify a huge database of proteins, helping real-world scientists understand protein function in human cells. You might think that an MMO is a strange place for this sort of research to take place, but to make progress, much like in astronomy, it needs to be a massive collective effort, which makes Eve about the best place for it, really.

“We were approached by MMOS to see if we could leverage the incredible human capital of Eve player intellect to contribute to scientific research and we were immediately thrilled at the prospect,” said Andie Nordgren, Executive Producer for Eve. “To see it finally get out of a very successful testing stage and into the hands of hundreds of thousands of players worldwide is a proud milestone for us. We hope our example sets the stage for many other successful collaborations between science and gaming to come.”

Players will look at closeups of proteins and categorise them, adding them to an ever-expanding database. This will eventually help Swedish research projectThe Human Protein Atlas with their task of understanding the building blocks of humanity as a race, and how these building blocks relate to disease. So next time someone says you’re wasting your life playing a space MMO, just mention that you’re actually contributing to a potentially huge medical breakthrough, so shut up.

Here’s a video explaining everything:

All Eve players are free to contribute to Project Discovery, from Eve trial-players to loaded veterans. Obviously there’s no obligation to touch it either.

Measures are in place to make sure the crowd-sourced results are accurate, so as long as most people are doing it right the results should be accurate. New items have been added to the Sisters of Eve loyalty points store to spend accrued analysis kredits on new items including unique clothing and a new type of booster.

As well as allowing players to make some sort of contribution to society, a few other big changes landed in today’s Eve release, including: