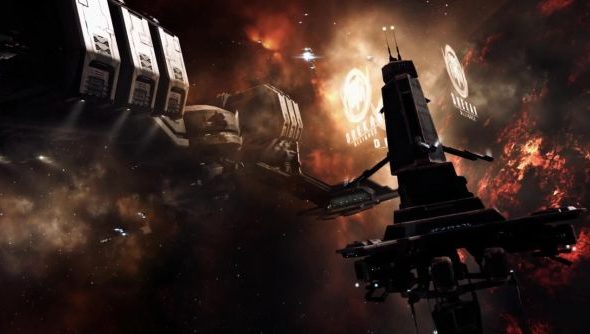 An Eve combo-story here for you. CCP have released the latest major update to their spaceship economics simulator, bringing major changes to the way sovereignty works – the system that governs which of the mega corps own which systems. Meanwhile, Eve superstar and all-round probable villain Alexander “The Mittani” Gianturco has today launched a Kickstarter for an in-universe book based around the non-fictional events leading up to the largest battle in the game’s history. He and actual writer Jeff Edwards are dubbing it the world’s first “sci-fi non-fiction.”

Playing (killing spaceships) with friends is good. Here’s the best MMOs to play.

Let’s start with what CCP is up to. The Parallax update has arrived, bringing with it some quality of life changes that allow control to be regained automatically over time by defenders against minor attacks that didn’t have significant impact. It will reduce the annoying need to travel between each control node and manually recapture it. It’s also now possible for corporations to self-destruct their holdings, making it a bit easier to transfer control when needed or abandon locations. Hopefully it will also lead to at least one major piece of industrial sabotage blowing up half the stations on one side of the galaxy. Chaos is what watching Eve from afar is all about.

Speaking of: this book, titled The Fountain War, is being produced in full by the new Mittani Media company in association with CCP. It comprises the man himself, the staff of themittani.com and author Jeff Edwards, who will be writing. The money raised will go toward letting Jeff, who is an experienced military and sci-fi writer, dedicate time over the next year to writing it, then on actually printing the book and marketing it, without using any of the usual publishing channels. Their Kickstarter video explains further:

This is an idea I whole-heartedly approve of, as the stories of Eve Online have kept it in the public conciousness and relevant far longer than any other game of its age. Even ones with userbases far exceeding Eve demand less attention by just being less interesting, and books like this are a good starting point for what will hopefully one day be a multimedia empire’s worth of converted stories.

However, it’s not the first book to try to document Eve Online’s history in some form. Andrew Groen’s Empires Of Eve doesn’t take the novel route, instead looking to be an archive of what occured during the first ten years of the game’s life cycle. That will be reaching its shipping stage very soon. Plenty of room for both, and many more besides, of course.

Fountain War is looking for $150,000 on Kickstarter, 50k more than Empires of Eve made, and more than ten times what Andrew was initially after. Early estimates would guess they’ll probably make it, and there are a lot more funding options available than there were on Empires of Eve. It’ll set you back $10 for a final digital copy, $25 for a version that will be released episodically over the next year or $75 for a softback real-world version. You can also pay for the author, the website and The Mittani to follow you on Twitter for $100. Value.