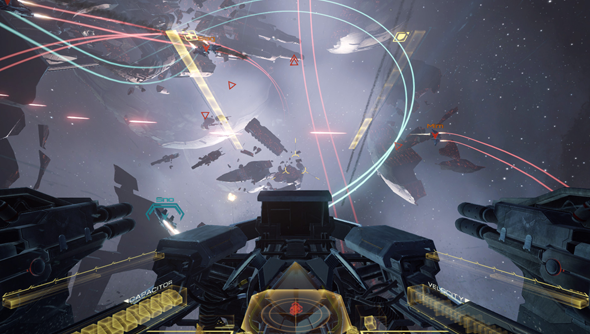 Does your PC turn on to the sound of the Rocky-theme? Do you have to tell it to be quiet in the middle of the night because you can’t sleep over the sound of it lifting weights? Do you sometimes worry it’s started taking steroids? If you answered yes to any of the above questions, CCP want you.

For Eve Valkyrie’s first phase of alpha testing the studio are looking for the players with powerful machines, able to run games in their tippest-toppiest of settings.

“I can tell you for the first alpha test, it’s going to be quite high,” Sigurdur ‘Siggi’ Gunnarsson, Valkyrie’s lead programmer told us. “We’ve already had to do a lot of optimisation to get the game running, what you see today. But we need to do a lot more before we launch the game. The alpha test’s going to be pretty high spec.”

Gunnarsson wasn’t able to say exactly what components they were looking for but he said you’d be “pretty safe” with one of Nvidia’s 900 series graphics cards or AMD’s 200 series. “One of the new ones,” he reiterated.

Judging by the new trailer, I’ve never been more tempted to spend my food money on a new graphics card:

Jeremy went hands-on with the latest build of Valkyrie last week and was blown away by how much it had changed from earlier iterations.

There’s still no word on exactly when the alpha will begin but you can log your interest on Valkyrie’s site.