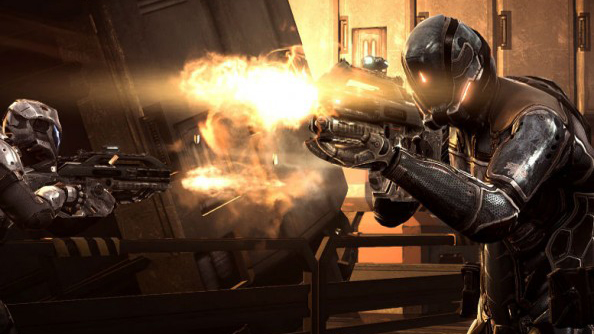 Without guns CCP’s DUST 514 would just be a lot of people logging in and walking around alien planets together whilst the universe above them shone with the dots of 400,000 player controlled spaceships freely flying about space. That actually sounds pretty phenomenal. Damn. Well, CCP have gone the route of giving DUST 514 players guns so they can make holes in each others’ spacesuits.

Here’s a video showing off the different loud bang sticks.

So the way it breaks down is that the weapons fall into three categories: heavy, light, andside arm. Heavy weapons are restricted to those in heavy armour, they’re the much larger miniguns, railguns, and that sort of thing. The side arms are the pistols, one handed weak weapons. Then, light weapons covers pretty much everything else.

The weapons can be augmented with, both, addons and new skills. It copies over the skill system from EVE, so you set a skill to train and whether you’re in game or not they will be progressing.

While DUST 514 is still only currently confirmed for the PS3 it will likely make its way over to the PC in the future, until then we’ll just have to keep up a healthy interaction by nuking our console cousins from orbit.