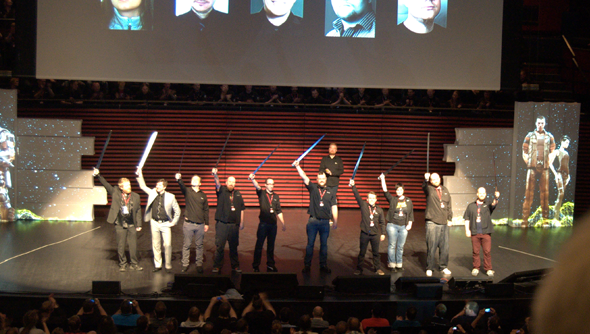 Eve Fanfest 2013’s closing keynote gave a glimpse of what the future holds for Eve, Dust, and CCP. It’s a future of space elevators, boarding parties, and personal stargates. Of course, this was CCP looking years into their games’ futures but they also made some promises of what players will have in their hands by next year’s keynote.

Andie Nordgren, Eve’s senior producer, took to the stage to detail how the past year had seen the developer form a five year vision plan for their games, “The five year vision should guide the themed expansions that come after [Odyssey]”. She hopes this should prevent the company from rushing off after sparkly features again, preventing them from having another Incarna debacle. 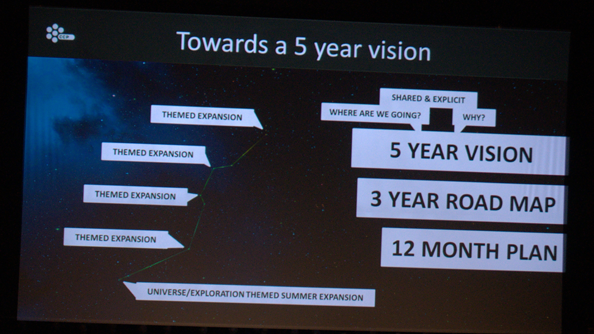 “Towards that second half of that five year vision,” Nordgren said, “we will expand the universe with truly new things […] because we don’t want to open new space in Eve Online that’s full of the stuff that you already know so while we work on letting you colonise, and build, and shape the existing universe, we’ll also work, at the same time, on developing both our ideas and our technology to bring you a truly new aspect of the Eve universe once you construct those new stargates.”

She spoke about plans to tie Eve and Dust together more tightly, describing a vision of Dust players boarding a Player Owned Station and fighting against other Dust players to reach the core of the facility to blow it to kingdom come, all amid the rockets and lasers of Eve players shooting each other to hell in the space outside. This is something CCP plan on having running in the games within the next five years, maybe in the next three.

Other plans announced were significant changes to combat and flight in Eve Online, not changes that will break from the rules of the game currently, but changes that make the experience more immersive. (Yes, she was this vague when talking about these elements.)

While CCP’sprincipal game designer on Eve and DustKjartan Emilsson was technically talking about Dust in his section of the keynote, the future for the Playstation 3 game can’t be discussed separately from how it will impact Eve. So in talking about AI drone attacks which the Dust players can fight to earn resources planetside, he began talking about the transport of these locally generated resources, and how they would be taken from the planet’s surface to the market, and that’s when he showed concept art for a space elevator. 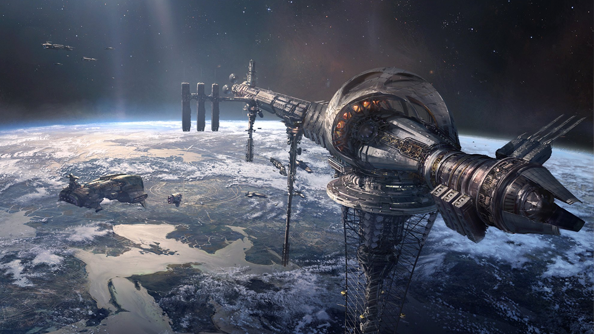 The way they picture the two games working together is to have Dust players generating resources, resources they then transport to the edge of the planet’s atmosphere in space elevators. Eve players collect the resources and handle all the manufacturing and industrial side of things. This keeps the mechanics simple for the Dust players and doesn’t deviate too far from the original idea of them to be simply grunts on the ground. Also, at the point when the materials can transfer from one game to the other CCP can turn off the NPC traders in the Dust marketplace and the two games’ economies will finally be tied and almost completely controlled by the players.

It won’t just be resources that Eve players will be transporting for the Dust players but the players themselves. With the new planetary conquest features coming to Dust on 6 May, the PS3 folk need to ship a stock of clones to the region they’re invading – the clones act as their battlefield respawn reserves – CCP plan to have Eve players take over the transport duties at some point in the future, deepening the complexity of the two games’ logistics. So, for a war to be continued there will need to be a well organised operation running in both games, one which is manufacturing the equipment lost in battle and also transporting the troops to and from the warzone.

Another plan to link the two games is to introduce eSports within the fiction of the Eve universe. Dust corps which own a planet will be able to construct an arena for gladiator bouts. These would then be broadcast in-game, giving something for Eve players to watch while mining ice belts in nulsec. With that tech it would also allow Eve players to watch the combat taking place on the planet’s surface below them, meaning they could watch the effect of their orbital strikes as they hit the players playing on their PS3s.

These plans are all way off in the future, though. Something less distant was an announcement made by Eve’s executive producer, John Lander. As he moves over to found the company’s mobile department, he promised the audience that “You will have ‘EVE mobile’ in your hand watching this keynote next year”.

He can’t say what the software will be able to do, they’ve not designed it yet, but he pointed to an app they’re releasing for Dust players on the PS Vita as an indicator of what to expect. The Vita Neocom lets players buy and sell items on the market, spec out their character, and access eve mail and the chat channel. 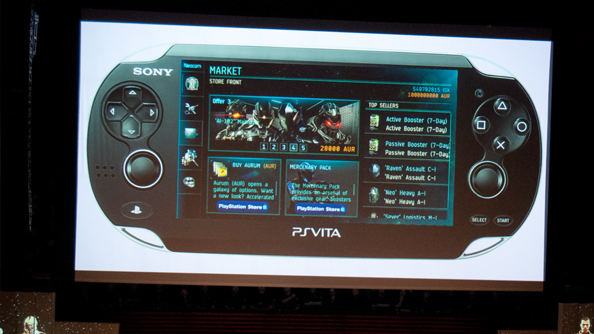 One thing that CCP’s CEO Hilmar Veigar Pétursson did want to shoot down speculation on, considering all this talk of ship boarding and game immersion, was any hopes that players would see an expansion to their avatar abilities. For two years now Eve players have booted into the game to see the inside of their cabin but are still unable to leave the room. “The door will remain closed,” Pétursson said, “maybe we’ll talk about something next Fanfest but there is no one really working on that right now.”

Other bits and bobs. This year’s Eve Vegas tickets are on sale now through the Eve store and for the first time you can buy them using PLEX. That means that players can buy a ticket without spending any cash but by trading for PLEX within Eve. That’s a wicked idea. (You will still need to get a ticket to get to Las Vegas and as yet there are no airlines that accept ISK (well, except Icelandair and that’s a different kind of ISK)).

Other announcements we’ve covered in a bit of depth already, the news that CCP are bringing out a collector’s edition of Eve Online to mark the first decade of the game’s release, due out this October. October will also see the release of a Dark Horse comic book based on the stories generated by Eve players.

The closing news was that CCP have partnered with Icelandic director Baltasar Kormákur to create a television series that is, again, based on the stories that have come out of Eve. Kormákur wasn’t able to attend the keynote as he’s in Hungary filming a pilot for HBO but he provided a video message saying how exciting he was to be working with Eve, describing the game as an “infinite story machine”.

Right, with that written up, I’m going to try my hand at a bit of this: 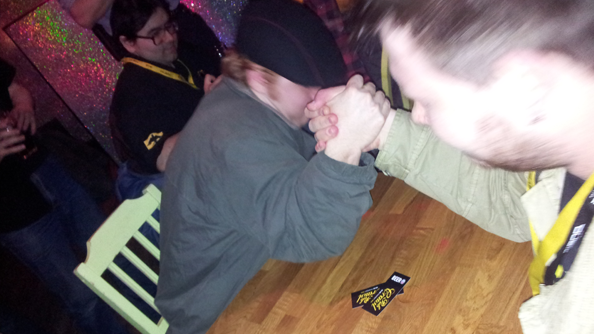