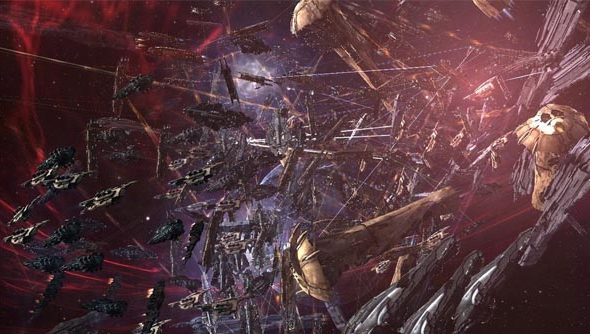 This weekend saw one of the joys of emergent gameplay: unplanned mass slaughter.

The Asakai system was host to more than 3,000 ships as they blasted one another into seven shades of space dust. While many, many corporations took part in the conflict, the major conflict was between Reddit’s Honey Badger Coalition and Something Awful’s Clusterfuck Coalition.

Edit: This article previously stated that the battle had crashed the Dust 514 node for the system, but it has since been confirmed that any battleserver issues over the weekend were unrelated.

There’s been an uneasyrelationshipbetween the HBC and CFC for a number months now, with a strict avoidance of any aggravating conflict between any of the alliances’ member corporations.

Saturday saw a break down in this armistice. According to Admiral_ Dovolski, who claims to have been present from the beginning of the battle, the Liandri Covenant, a member of the CFC,had a small station based in the Asakai system which came under attack by Drunk’n’Disorderly, a member of the HBC.

While theDnD assault was relatively minor, the Liandri Covenant put out the call to arms among its alliance. The Liandri force moved out to engage the DnD ships, a battle which ended with a Liandri loss and a hasty retreat. Though, as they warped away a Goonswarm Fleet (a major power within the CFC) arrived.

For the next two hours reinforcements poured into the system, bolstering both sides, until there were more than 2,800 players in local chat. The eventual winner is said to be the HBC. However, both sides lost a number of capital and titan class vessels. According to LG03, “estimate puts damages at $17,500 inflicted on the CFC. HBC suffered around $1000 in losses.”

“It looks like at the end of the battle, the CFC has lost ~44 Dreads, 29 Carriers, 5 Supercarriers and 3 Titans to 10 Carriers, 6 Dreads, and one Supercarrier killed: a complete rout. Initial reports suggested that two Pandemic Legion Nyxes died, but this hasn’t been confirmed on Eve-Kill yet.

The battle also crashed the Dust 514 node in that system, meaning Playstation players will have had their first glimpse of what it means for their world to be merged with the PC.