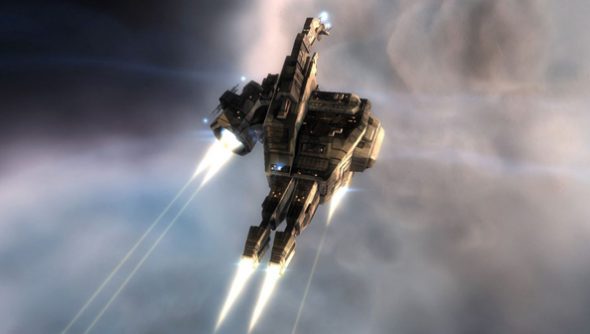 Totally not Judas had joined the corp shortly before the attack. Christ’s Little Angels had been recruiting and, on the dual conditions that Judas create a new Amarr character and agree not to fly in Gallente or Minmatar space, CEO DeathKiller21 had welcomed him into the group. That was his first mistake.

Judas promptly began to look for easy targets, and set upon two vulnerable mining vessels. While one, a Mackinaw, was destroyed, the other managed to warp out of reach before their newly inaugurated traitor could open fire. But it soon became apparent Judas wasn’t the only spy to have joined Christ’s Little Angels.

“After some tears and threats in corp chat, I got private conv from a guy who joined corp earlier and was going after the same target,” recounted Judas on Reddit. “He decided to stay silent, but had neutral logi [logistical cruisers designed to remotely repair friendly ships in battle] coming.”

Shortly afterwards, another spy revealed themselves, and pledged more logi to Judas’ questionable cause. It was then that CEO DeathKiller21 decided to undock and deal with the insubordination personally.

The CEO had fielded a Rifter, a powerful combat frigate. However, thanks to the waiting logi, Judas was able to reduce DeathKiller to 20% armour before help came via corp chat.

‘Help’ arrived in the form of Judas’ two fellow spies, who set about dealing as little damage as possible to the traitor. The battle turned when one spy broke cover to help take down a corp-loyal Prophet, a combat battlecruiser.

“I pooped Prophecy within few minutes and started heading for [the CEO, now in a Gila],” explained Judas. “We tried to ransom him but guy just logged off thinking he could make it that way so we destroyed him.”

“So, I got some interesting kills today, made few people mad, got some new friends and found pretty interesting channel to chat in. Op success!”

‘You couldn’t make it up’, is what they say, which isn’t quite right. The fact is you needn’t make it up – Eve is a breeding ground for this sort of tale. Have you got any other favourites to share?