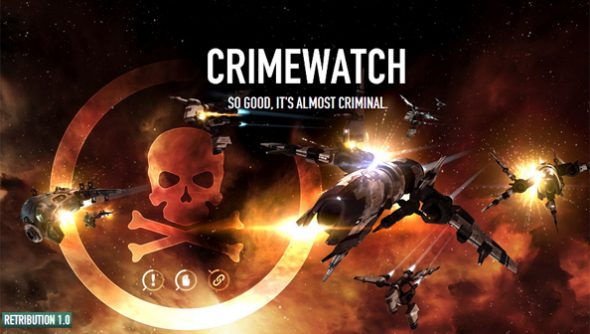 Eve’s 18th expansion to date has been announced, and its stated aim is “justice for all”. That means the recreation of bounty hunting, and a new system for reporting crimes – Crimewatch. Um.

The bounty hunting system has been “recreated” as, to hear CCP describe it, a sort of constitutional right. The developer suggests that the new system will allow any pilot to administer judgement Dredd-style via vigilantism if they find “decisions of the law lacking in appropriate justice”, but are unable to summon the necessary firepower to put things right themselves.

Frigate-class ships are to be overhauled to enable greater choice and specialisation, while a “solid” mining frigate – featuring better yield and ore capacity – is to be made available to new players, further smoothing Eve’s initial difficulty curve. Upgraded textures are also coming to the rest of the game’s sub-capital ships.

The expansion’s most ambitious addition – as well as most scant in detail at this point – is Crimewatch, a new system which aims to provide more meaningful consequences for player actions in Eve by broadcasting those actions to other players. What form this will take is as-yet-undisclosed, but we’re hoping for a Kirsty Young-fronted TV show.

“Freedom of choice is not limited by Crimewatch,” say CCP. “Freedom from consequence is.”

Perhaps Crimewatch will highlight Eve’s lesser injustices, but can it possibly track the large-scale crimes driven by entire corporations? And should it?