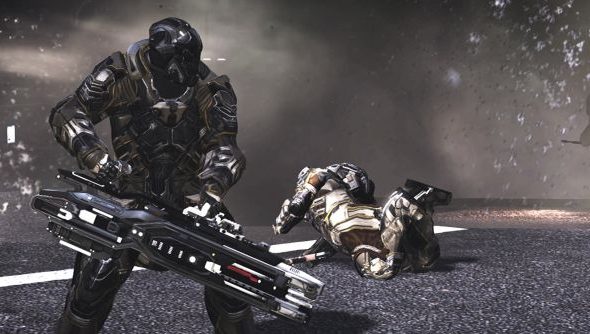 Eve Online’s spin-off first person shooter MMO Dust 514 begins its closed beta shortly – but only on the PlayStation 3. Will it be an exciting experiment in cross-platform gaming, or a grand folly everyone will have forgotten about this time next year?

Dust 514 has seemingly been in development forever. The concept is intriguing – it’s an MMOFPS that takes place in the same universe as developers CCP Games’ Eve Online, with battles in Dust 514 occurring alongside space fights in Eve. But, oddly, it’s a PlayStation 3 exclusive, whereas Eve is strictly a PC (and Mac) (and Linux, if we’re getting pedantic) title.
If you’re lucky enough to own one of Sony’s glorified Blu-ray players, you can sign up for the Dust 514 beta here. According to the site, registering doesn’t guarantee your entry into the beta. If you already play Eve Online you’ve got a better chance of getting in, and if you attended Iceland’s Eve Fanfest you’re guaranteed entry.
PlayStation 3 exclusivity may sound like an odd choice given Eve’s PC-centricity, but once the dust settles we’re pretty sure it’ll make sense. Console shooters attract a rather different crowd to those on the PC, and matches tend to play out in a completely different manner. Given the comparatively slow nature of the PS3 controller, matches will be more comprehensible to Eve players looking down from the heavens.
It’s also a great marketing ploy from CCP, as PlayStation 3 shooter fans will undoubtedly be drawn into Eve’s branching plot and elaborate battles. Dust 514 will be free-to-play, too, so those notoriously tightwad console gamers will be able to experience Eve’s world without spending a penny. Add to this PlayStation Vita app, and you’ve got an all-round package guaranteed to pull in the punters.
We’re not entirely sure how it’s going to work as a game, but we’ve heard that in addition to giant battles players will be able to capture swathes of land for their own corporations. Add to this vehicular combat, and it all sounds a lot like PlanetSide 2, but with the enticing concept of ground battles being observed and controlled from space – and vice-versa.
Dust 514 is set to launch this summer, and more information will be revealed at this year’s E3. As we’re a PC gaming site we won’t be reviewing the game, but we will be reporting on its knock-on effect on Eve Online.