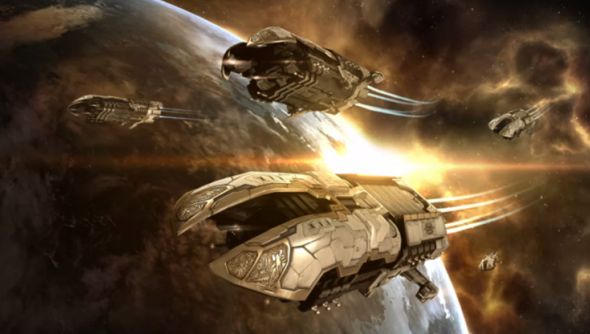 As you may well have noticed, the Eve: Retribution patch notes
Eve’s latest expansion, Retribution, are absolutely enormous. That’s
because the development team have been busy adding to, tweaking and


rebalancing a game that, they remind us, is about to enter its second
decade. While Eve has always been something of an acquired taste as MMOs
go, never boasting any of those multi-million subscriber numbers,
developer CCP Games nevertheless want to widen their reach come 2013.

While
they have no plans to dial down Eve’s notorious difficulty, they do
want to make things a little easier to understand. “We don’t want to
dumb our game down, we don’t want to make it easy, but what we do want
to do is make it accessible,” says Jon Lander, the game’s Executive
Producer. “We want people to be able to get to the good parts of our
game without having to fight through the difficult bits.” It’s all about
taking the barriers of entry down, but keeping the difficulty levels
up.

Hence many of the changes that Retribution has brought with it. For a start,
the user interface has also been given a good going over, benefiting
from dozens of menu tweaks, bug fixes and clarifications. For example,
it’s now easier to tell when it’s safe to log off and a new safety
system prevents players from accidentally committing crimes, making it
much easier to understand the bounds of the law. Lander
describes this as working like “a safety catch” on a weapon, as it will
stop players from performing actions that they may not have realised
were hostile, such as mistakenly stealing a neutral ship. The catch
works on three levels, so rather than just switching between a
goody-two-shoes mode and amoral wickedness, a partial setting between
allows players to perform suspect actions such as stealing loot, but
still prevents them from getting themselves into deeper trouble with the
authorities.

It’s
one of several practical additions that Lander says will make the game
“easy to learn, but hard to master.” and he emphasises how he still
wants Eve to be a dark, difficult and dangerous MMO where you can be the
bad guy if you choose, something he believes there is still very much a
demand for. What he doesn’t want Eve to be is ambiguous or outright
confusing. The challenge shouldn’t come from the interface or from
making silly and otherwise avoidable mistakes, nor the game requiring
players to “try and read a flight manual” before they can begin.

Those
already au fait with the game’s eccentricities will be more focused on
the new ships and an improved Crimewatch system which, again, has been
designed with clarity in mind. Players can now place bounties on other
players, corporations or alliances, and the payouts can be shared among a
fleet if they work together to earn that bounty. Getting this right has
been particularly important to CCP, and lead designer Kristoffer
Touborg says they’re part of the games “social moderation,” another
system in place that ensures players regulate and manipulate the world
themselves and keeping the development team’s interference to a minimum.
“We’re giving players better tools to police their sandbox,” he says,
and it’s entirely possible that a new profession may come from these
changes, with some players switching to full-time bounty hunting. I hear
it’s good work if you can get it. As
well as adding four new destroyers and a mining frigate, Retribution
tweaks many of the other vessels in the game. While the cosmetic changes
to several vessels are obvious, there’s much, much more happening
beneath those metal skins. “It’s been years since we rebalanced this
number of ships,” says Lander, stating that forty ships, or “about a
third” of the game’s fleet has been modified. As well as the ships
themselves, many modules have seen some alteration and even a few skills
have been modified, meaning experienced players are certainly going to
feel the difference the next time they sit in the cockpit. The mining
frigate may prove particularly popular and Lander says it’s ideal for
“ninja mining,” allowing players to dash in and out quickly.

Eve
will celebrate its 10th anniversary on May the 6th and Lander says that
CCP has “really big plans” not only for the year ahead, but for the
game’s second decade. It looks very much like bringing Eve to a wider
audience is central to these plans and while Lander appreciates that
certain stories about his game make very good press, he doesn’t want
potential players thinking “Oh, it’s just a game full of scammers.”

Eve’s
recent inclusion in a videogames exhibition at the Museum of Modern Art
in New York may help to give would-be players a better idea of what
else goes on inside this game. The choice was made, says Lander, based
on “the beauty of Eve, coupled with the fact that it’s a universe that’s
lived in and shaped by our players, almost to a minimum by ourselves,”
adding that he found the selection “incredibly humbling.” Those big plans also include the continued development of the PlayStation tie-in Dust 514,
a free-to-play shooter set in the same universe, and CREST, an API that
will allow user-created third-party apps to connect to the Eve server.
This will allow players to monitor Eve from their tablet or mobile,
checking in-game news or keeping up with their corporation. Touborg even
mentions the possibility of multiplayer ships, perhaps giving you the
chance to form a crew with your comrades, and that he’s been considering
ways for smaller ships to piggy-back larger ones. “One thing that I
really want to start looking into,” he says, responding to a question,
“Is how do we make real carriers? You have a carrier, ten of your
friends dock, you jump somewhere and they all leave your carrier to do
the fighting.” It’s certainly an interesting idea.

2013
will also be the year of Eve esports and it may surprise you to learn
that, ten years after its launch, CCP are very keen on the idea of
introducing cash tournaments to their game. Eve enjoyed its first
flirtation with esports earlier this year, running the $10,000 New Eden
tournament. “This was a test case for us to see if the whole esports
thing would work,” says Lander, who was pleased with the results. “Next
year we’ll have quite a lot of live tournaments for EVE Online.”

With
its interface updates and its new tools for the aforementioned “social
moderation,” Lander doesn’t just see Retribution as another content
update, but says it’s “a great foundation for what I’m calling ‘The
Second Decade of Eve.’” It looks like CCP plan to grow their game in
many different directions and, if they’re successful, we may stop
thinking of it as quite such a niche MMO.