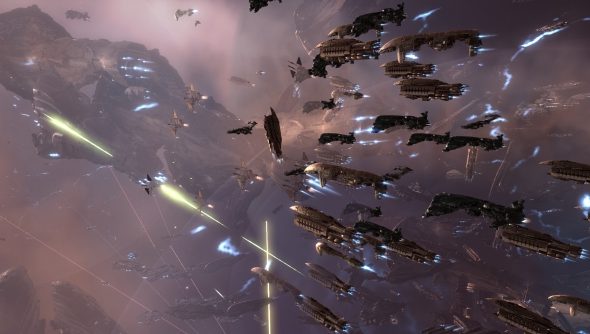 John Lander is the Senior Producer at EVE Online; he started as a IBM project manager and his focus is bringing organisation to EVE. We talked to him about war, the Mittani and the brutality of EVE’s ethos. (This interview took place before The Burning of Jita in April.)

PCGN: What feedback did you get from Fanfest?
John Lander:Absolutely fantastic. I have to admit that I was a bit nervous going into it, because we had such a reaction from the community last year. And this was ‘this is the new direction we’re going to take, this is the stuff we’re going to look at’. Me as an EVE player, this was what I wanted to hear myself, but you never know. And traditionally Thursdays been quite a quiet day for the fanfest. So we thought we can just add Dust into Thursday. We had to show those players, who had come to see EVE, what Dust will mean. When everyone saw the guys playing the EVE side and doing the bombardment… they just came out of it with a huge buzz, ‘oh my god, Dust adds to the EVE universe, this is going to be a really good thing.’ It fits really well in with the war theme. Friday wasn’t aspirations, it wasn’t hype, it was ‘this is what we’re going to do.’ A new, slightly more sensible, John Lander-focused EVE. It was what people wanted to hear. We still need to look at opportunities to do amazing things, but to be honest, this year the amazing thing will be Dust and making these two things work in the same universe.