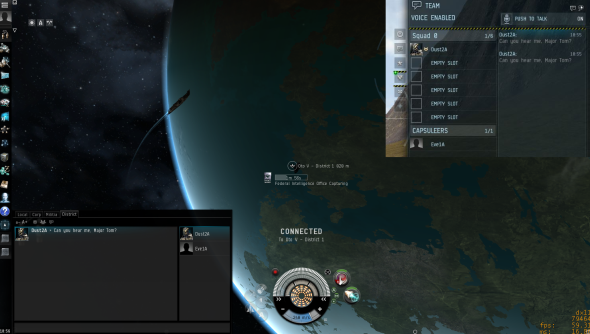 “Orrrrbital STRIKE!”, the missing arena announcer doesn’t boom whenever one of Eve’s pilots pokes a fiery finger into Dust 514’s snowglobe. We can only presume CCP are still in search of Street Fighter’s disembodied voice, which wisps about the world on the wind between games.

In the meantime, the developers will continue to fiddle with how their free-to-play PS3 shooter connects with the MMO universe which envelops it. From today, Eve pilots will have four more reasons to bomb shootymen on behalf of their factional fellows.

Orbital striking has been a powerful tool in Dust 514, washing away emplacements and deleting dangerous vehicles from the map. But its effects in the scaled-up Eve universe have been barely visible. A PC pilot will communicate with his or her planet-bound counterpart in orbit and, once the Dust player has earned enough ‘war points’ in a match, call down an AOE strike.

The real-time toe-dip through the boundary between games may have been thrilling, but that’s where the “cautious” connection ended.

To encourage Eve pilots to engage however fleetingly with Dust players, CCP have added a “generous” loyalty point reward system for participating in strikes in Factional Warfare. The points can be redeemed for faction items at the appropriate militia office.

Perhaps more importantly, Dust players will no longer earn strikes via war points. Instead, the timing of the strike will be at the discretion of the orbiting Eve pilot – though they’ll still need to circle the beacon for three minutes first, not to mention keep an eye out for rival factions, before dropping their payload.

What’s more, “killmails” will see your strikes recorded for posterity – a mass killing to point to in your dotage, “like a fond old photograph”. And lastly, there’s a new option to automatically add yourself to shared text and voice chat between the two games when connecting to a district, for maximum efficiency in death-dealing.

Strong measures all. Here’s the question, though: are Eve players Dust players? And if they’re not, do they care about their chrome-men on the ground?