At first glance, Everspace 2 looks like a space sim along the lines of Elite: Dangerous. But as the developers told me – and as I quickly learned after just a few minutes of playing – this is actually Diablo in space. Everspace 2 is a fast-paced game of looting and shooting played from a pilot’s seat, and even now, years from release, it’s shaping up to deliver a compelling loop of sci-fi gunplay and incremental rewards.

In contrast to the roguelike style of the first Everspace, the sequel has a crafted universe for you to explore. It’s split into discrete chunks of open space – one locale might have a mining base and some asteroids, while another features an outlaw base and mess of shipwrecks – and you can hop between these areas by simply orienting your ship at a distant point of interest and hitting the boost button. Assuming you’re not jumped by pirates or hit another random event, you’ll be at the next location after a quick fade-to-white.

The developers tell me this is partly a simple allowance for the game’s modest budget, but it also ensures that you’re able to get into the action quickly, and that’s really what the game’s about. This is more Rogue Squadron than TIE Fighter, so you won’t be redirecting shield energy or anything of that nature. You just point, lead your target a little, and shoot.

Your ship can house a range of weapons, which you can swap in and out from an inventory screen. Everything from standard miniguns to the charge-up railguns feels good to aim and fire. You’re also bolstered with special abilities, ranging from an overcharge for your standard guns to an EMP blast that immobilises any nearby fighters for a few seconds. Enemy ships blow apart in convincingly fiery explosions – actual physics of the vacuum of space be damned – and it all feels good within minutes of picking up the controls. 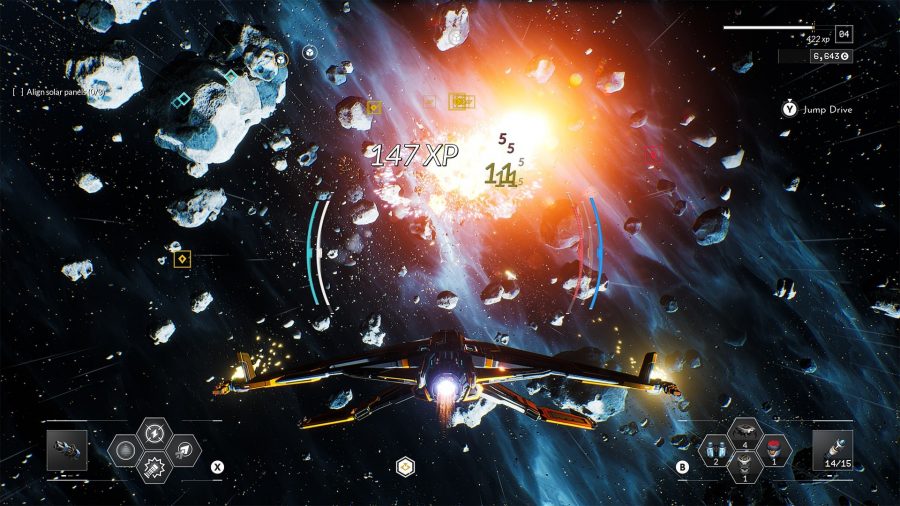 Those explosions leave behind scrap and loot, which you can either sell at an outpost (never more than a few seconds away) or equip directly to upgrade your ship. Your inventory has all the post-Diablo accoutrements you’d expect, and allows you to quickly compare stats, swap in better gear, and get back to the action.

Missions will string you along through those combat encounters. You’ll have story missions and side quests complete with voice acting and cutscenes in the style of a graphic novel to push you forward, though at the moment the game doesn’t have those cinematic elements in place. The plan is for side quests to eventually culminate in permanent bonuses, similar to the perks you get from companion quests in games like Fallout.

Perhaps the most impressive thing about Everspace 2 is that it’s already this good this far from release. The game isn’t even scheduled to hit early access until the second half of next year, and the simple loop of shooting down some enemies, grabbing the loot, and shooting some more had already started to get its hooks in by the time I was done with the demo. If the full release can manage to string together those moments of action with compelling story and progression hooks, this arcadey space shooter will be one to watch.