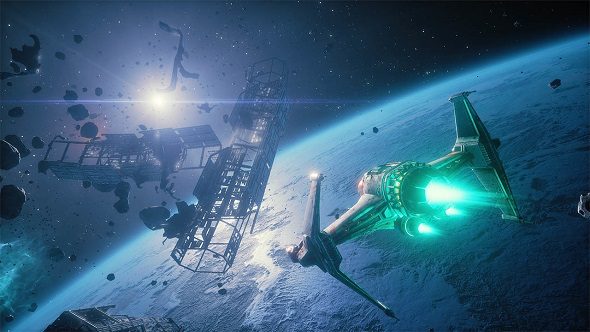 For more instellar adventures, check out our list of the best PC space games.

According to developer Rockfish, the use of scanning probes had become “too obligatory” when trying to complete a run. Rather than flying around a sector to discover its secrets, players would simply craft a scanning probe and then “dully work off HUD markers one after another.”

The power of the scanning probe also invalidated other mechanics like comms hubs and cloud fields, as pilots knew exactly where everything was within their current area. There was also the issue that increasing the material cost of scanning probes would cause unneeded frustration, so they opted to remove the mechanic altogether.

To replace it, Rockfish have added ‘radar memory’, which makes scanned objects stay on a player’s HUD. More comm hubs have been added into Everspace’s procedural generation and the new sensor relay module increases a ship’s scan range. The new system hopes to preserve Everspace’s “risk/reward driven exploration”, while not leaving pilots completley blind when trying to clear out everything in a given area.

Besides that major change, Everspace’s full release gives players some context as to why they are blowing up everything in the galaxy via a story, alongside adding VR support for both the HTC Vive and Oculus Rift. You can now change the mapping for your ship’s yaw and roll when using a controller and there are some additional ship colours, should you want to give your craft a new lick of paint. For the huge list of additions, bug fixes and balance tweaks, check out this post on the Everspace’s Steam blog.