Some people just want to watch the world/voltage regulator burn. Extreme overclockers have for too long been held back by power limitations when dumping liquid nitrogen all over their fancy tech. But no more, EVGA is now offering the EPower V, a standalone voltage regulator module (VRM) board capable of driving 1,147W towards two outputs.

If you’re like me and don’t enjoy blowing up what precious graphics cards and CPUs you’ve paid good money for, the problems relating to power limits under liquid nitrogen probably don’t affect you all that much. However, there are people out there with a thirst for clockspeeds that won’t be quenched by a measly 5GHz.

Extreme overclockers will happily destroy a few chips on their quest for the highest overclocks possible, and EVGA wants them to push things even further with the EPower V VRM board.

EVGA seem to like the idea of people purposefully destroying expensive tech, and of course they aren’t new to enthusiast overclocking parts. The famous (in certain circles) K|NGP|N is their resident overclocker after all. If you want to hit 3GHz on a GTX 1080 Ti, as K|NGP|N managed with a custom PCB mod, you need to bypass voltage limits built into the card somehow. The EPower V is EVGA’s answer to pesky VRM limiting overclocking potential. 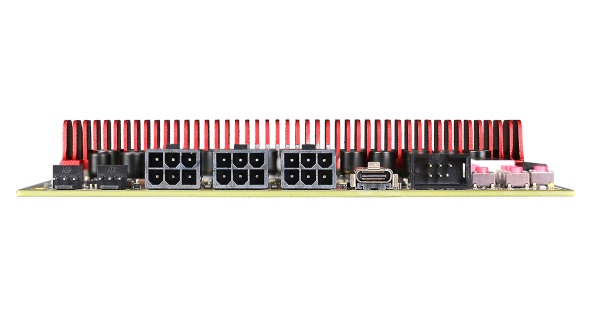 Powered by 3x 6-pin PCIe connectors, the EPower V uses a 12+2 phase design to zap even more VCORE and VMEM into a graphics card than any manufacturer has ever prescribed. VMEM capacity can reach 171W, and VCORE up to a whopping 1,147W. It also features EVBOT MKII buttons to adjust voltages without the need to restart. EVGA even included a USB 3.1 Type-C port on the board for greater voltage control.

The EVGA EPower V isn’t cheap, coming in at $249.99. You will also need to be handy with a soldering iron to get things connected up, because this extra board needs to be physically attached, by you, to your existing graphics card’s PCB. You’re also going to need to be brave and break a whole bunch of connections on your expensive pixel-pusher, but that shouldn’t be an issue for the target audience. When liquid nitrogen is getting thrown into the mix, soldering is the least of your concerns.

For most of us then, the EPower V is a ridiculous, albeit very pretty, product and completely unnecessary. For a select few, it’s continued support for their hobby by one of the largest manufacturers in computer components today – and that’s a good sign for the PC building community as a whole.