The Evil Within is more funfair House of Horrors than it is waking nightmare. At one point I was searching a gothic manor house for brains that I’d sap of juice to open a vault door while avoiding traps, like a meat grinder hidden behind a set of double doors. It was a little silly considering this is from the maker of Resident Evil.

I couldn’t help but warm to its clumsy scares and crude, cliched environments, full of blood and ghosts. However, it’s all held back by a frustrating camera and mechanics designed to hobble you.

The Evil Within is a survival horror game that puts you in the shoes of detective Sebastian Castellanos. After being called out to a mass murder at a mental hospital you are knocked unconscious and become lost in a land of zombie-ish monsters, ladies with spiderlegs, and a chap who teleports about the place threatening you with his knife. In trying to escape this world you’ll have to find out more about the mad mind that created it.

We were able to play through two chapters of The Evil Within. The first, chapter four, opened on a twisted forest on the outskirts of a remote village. I was accompanied by a doctor who is looking for his patient, Leslie. As we entered the village he recognised the dilapidated building ahead as his brother’s surgery. While The Evil Within is largely linear, I was free to explore the buildings in the village or carry on in my search for Leslie.

The sound of Debussy’s Claire De Lune was coming from the old doctor’s surgery so I went in for a closer look. I later learned that the piece of music is played any time you’re near a save point. Though the music also appears at other points in the game: in the later chapter I played a ghost sat at a piano, practicing the piece.

The interior of the surgery was dark except for the moonlight coming through the window. I could light it better with my lantern. Using your lantern’s supposed to be a balancing act between getting a view of your surroundings and being a beacon for drawing enemies your way. But, with the enemies being pretty easy to dispatch, I kept my lantern out most of the time. With the light out I got a better look at the place, it’s classic horror movie set dressing: torn, motheaten curtains, warped, splintered wood, the occasional bloodsplatter.

It’s all horror movie cliches but that’s endearing, not off putting. 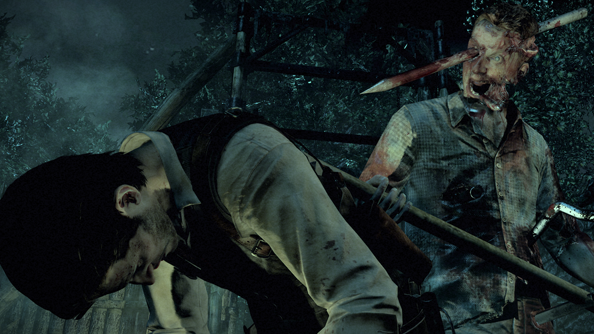 The sound of a voice led me to the back room. Over and over it said “Peel away. Peel away.” It was the voice of my companion’s brother. He was stood hunched over a body repeating his mantra as he tore at the patients skin and his own.

He’s not too pleased to have been interrupted.

The doctor turned on me and started to shuffle in my direction. The enemies in The Evil Within, while not zombies exactly, are largely of this slow, stumbling variety. When they’re close enough they’ll swing at you with their hands and try to choke you. You can either knock them back with your fists or the butt of your gun, or you can try and kill them with a headshot. I switched to my shotgun and exploded his head like it was Dawn of the Dead.

There’s always a chance that the bodies will get up and come at you again. the only way to be sure is to torch their corpse with a match. Supplies are limited, however. Castellanos can only carry five matches at a time because… small pockets? The guy can carry a shotgun, a pistol, a crossbow, and medical supplies but he can only hold five matches at a time.

The violence isn’t over, an X-ray on the doctor’s table shows that there’s a set of keys in the patient’s chest. With a press of the X button Castellanos whips out his knife and starts carving through the sternum, reaches in and pulls out the keys. The gore of The Evil Within is far from subtle – at one point later in the demo you’re plunged waist deep into a pool of blood and bodies.

Soon after killing the mad doctor we meet up with Leslie but, in the dank corridors where we found him, I soon become separated from my companion and his patient. When you aren’t looking the walls in The Evil Within can shift and change. Where once there was a staircase there can now be blank brick. It’s a neat trick to keep you guessing as to what will happen next. 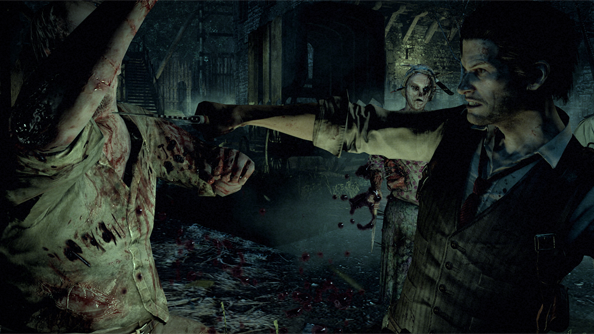 It’s at this point I came across one of The Evil Within’s invulnerables. While the shuffling monsters can be fairly easily dispatched, the developers have included some boss monsters who you just have to run from. This wouldn’t be that difficult but Castellanos has possibly the shortest run I’ve ever come across in the game. He can manage about 10 steps before he has to start walking again. So, despite being chased by a woman with giant spiders legs I had to keep stopping to catch my breath. It’s frustrating because, like the limited number of matches, it’s like the game can only be challenging by creating unrealistic limitations.

According to Bethesda Castellanos’ run can be lengthened through upgrades. These will be paid for using cannisters of green goo that are found about the environments of The Evil Within. Unlike ammo, matches, and health kits, these cannisters were plentiful. They must be some sort of currency in this strange world because they were strewn about the place like loose change.

After escaping the invulnerable spider woman the demo skipped to chapter eight. It’s here that things took a further turn into silliness. Your companion, the doctor, who you’re now chasing, runs into an old manor building, dragging Leslie with him. He runs past a vault door that swings shut behind him. From the door are three large pipes that lead off into different parts of the mansion, following them will lead you to brains.

The brains are wired up to a battery that’s keeping them alive and you have drive a probe into them that sucks out their vital juices, powering the motors of the door. As brains are known to do. 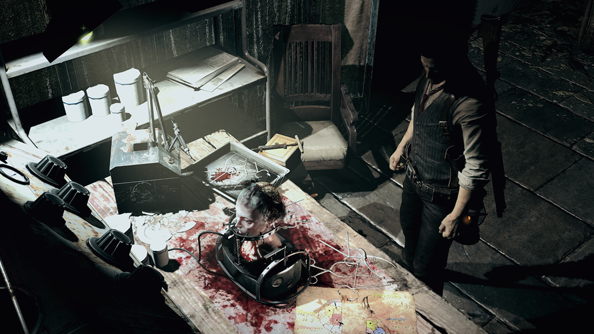 As you follow the pipes through the house you’re sporadically attacked by Ravik, the teleporting, blade-wielding chap I mentioned before. He’s at the heart of this strange world and we’re often shown ghostly images of him when he was younger. These moments where he teleports in aren’t scripted and you’ll have to try and escape him before he lands a hit because it amounts to an instant death.

Escape isn’t too hard though it’s hindered by the camera, as much of the game is. Your view of the world is tight in behind Castellanos’ head, whenever you back away the camera can get caught on walls making it difficult to see how close an enemy is to you. Your aim can often be knocked off shot by the camera, too, making shooting enemies that are charging you difficult.

The camera was at its most frustrating when I found the meat grinder. I was exploring the mansion, looking for a fresh brain, when I’m suddenly dragged towards a set of double doors by a rope. The doors open to reveal to spinning spiked rollers. There’s a blinking motor that I need to shoot to switch them off but getting a good shot off with the pistol is hard because the camera is bouncing all over the place.

The camera is the number one reason you’ll be killed by monsters (and meat grinders) and hopefully it will be fixed before the game launches.

The Evil Within session left me with a mixed impression of The Evil Within. I liked the cliched world it’s set in, with its buckets of blood and closets full of monsters. It’s not scary but it’s an endearing sort of silly. However, it constantly felt like I was being hobbled by things outside of my control – the camera, Castellanos’ ridiculously puny lungs, enemies using a god mode.

Like a funfair’s House of Horrors, it’s obvious that everything around us is fake, but the mechanics that make it work need to be hidden for us to let it make us jump.