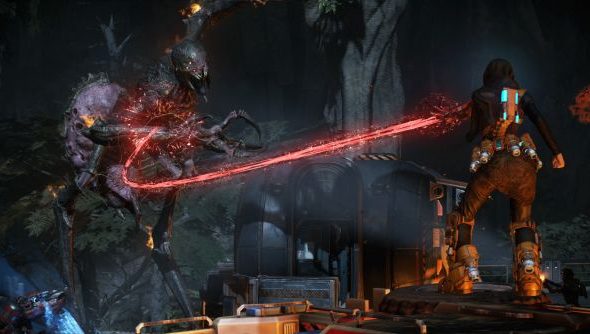 Update: July 6, 2016: Just ahead of the big 2K announcement tomorrow, Evolve has been pulled from sale on Steam, sparking new speculation.

As Eurogamer pointed out, the assymetric FPS has seen its playerbase dwindling on PC, according to SteamCharts. This has lead to speculation that it’s going free-to-play in a bid to put a roar back into its goliath lungs.

I for one hope it works, if this is the case. It’s a solid game that just never built up the community it needed. Of course some of this was thanks to the muddy messaging and endless DLC packs, but that just makes it more suited to F2P, surely.

We’ll update tomorrow once the official announcement has been made.

Original Story: July 6, 2016: Remember Evolve? Landing last year in a haze of drama and worry over DLC plans, it rather quickly disappeared. We’ve never had accurate sales figures, though it clearly did well enough that developers Turtle Rock managed to stay open. It was apparently pretty good, but damaged by a poor marketing campaign with confused messaging. Now something is happening tomorrow, but we have only a hashtag to go on as to what it might be.

Read more: our favourite games ever.

A banner countdown on the official site indicates the hashtag #StageUp and points towards around 29 hours from now – tomorrow afternoon UK, morning US time. There’s no further information given, and we haven’t heard a peep out of Turtle Rock since a new character was added to the game in January.

Possibilities for what the announcement could be are endless. Another round of characters and monsters? Possibly new levels, as represented by the use of “stage”? Maybe a large announcement, like a sequel, or something smaller, like a big sale or an all-in-one GOTY edition?

We’ll find out tomorrow. What would be most interesting to you?