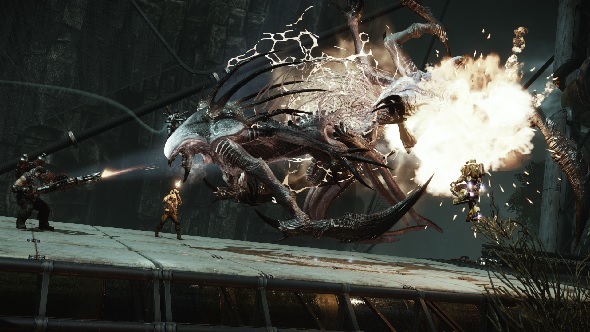 Turtle Rock have announced that they are to stop supporting asymmetric team shooter Evolve. This doesn’t mean the servers are shutting down – they probably aren’t – but that there will be no further updates, and longer-term projects, like bringing Evolve: Stage 2 to consoles, will now not happen.

Thirsty for more team-based action? Here are the best multplayer games on PC.

The news comes via a heartfelt post from Phil Robb and Chris Aston, two of Turtle Rock’s original founders, on their studio’s official forum.

“This is the life of AAA game developers who aren’t self-funded and don’t own their own IP. We don’t get to make the call.”

In other words, the decision to pull the plug was taken by 2K Games, the publisher who picked up Evolve after original publisher, THQ, wound up going bankrupt.

Turtle Rock don’t go into detail about why 2K made this decision, but the simplest and probably most accurate assumption is that Evolve simply wasn’t making enough money. SteamCharts shows a big spike in player numbers after it went free-to-play back in July, when it achieved its peak concurrent player count of 51,099, but populations since then have reflected the trend of sharp decline that’s been typical ever since its release in February 2015.

There’s not the slightest taste of bitterness about the decision, however. “Thanks to 2K for picking up the mantle out of THQ’s bankruptcy and makng Evolve one of the most anticipated games of 2015. Additional big thanks to 2K for reaching outside their comfort zone and funding Evolve: Stage 2 by taking a AAA game free-to-play, which was a first for all of us.”

Referring to the risks of the publisher closing things down, Turtle Rock say “we all know that going in but we still sign the dotted line because we love what we do.”

The post closes by saying “this is not goodbye. We have lots of stuff in the works that we hope you’ll enjoy”.