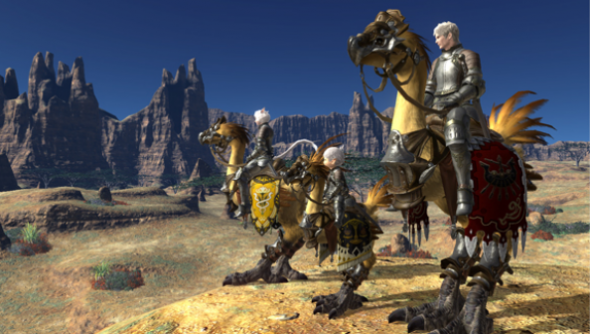 Square Enix are adding the final touches (again) to Final Fantasy XIV Online. A Realm Reborn will have plenty of scope for exploration, and as any fan of the series will know, this inevitably means saddling up on a massive yellow chicken/ostrich monster. Or Chocobo, as they are more affectionately known as. See legions of Chocobos in the latest trailer, as well as a bunch of nasties and some seriously oversized swords.

Considering the trailer is entitled ‘Exploration’, there’s quite a great deal of not-exploring-but-beating-up-monsters in the five minute video. Still, we’re not ones to complain about sending a raiding party out to slay a fire-breathing monster, so we remain pretty satisfied. The monsters are shown off in a variety of pretty locales though, so there’s still some sightseeing to be had.

Still, it’s pretty clear whoever is breeding Final Fantasy XIV’s Chocobos is a complete n00b though. Look, they’re all yellow! Not a blue, green, black or gold one in sight! And everyone knows that you can’t get anywhere without breeding a black one.

If the trailer perks your interest you can sign up for the beta now. Phase three of the beta starts on the 14th June, and from then on PlayStation 3 players will be able to play on the cross-platform servers. This is one of very few opportunities where you can play with your inferior console friends at the same time, so seize this chance if you’re into overly-styled haircuts and unrealistically balanced weaponry.