When introducing me to their giant-slaying game Extinction, developers Iron Galaxy point out our long-standing obsession with bringing down colossal creatures – David and Goliath, Jack and the Beanstalk, King Kong, Godzilla… the list goes on. But, be it Iron Galaxy’s intention or not, there is only one story of ogre killing that players will be comparing Extinction to: Attack on Titan.

Play something great today from our list of 2017’s best games.

Extinction is about protecting walled cities from 150-feet tall giants known as Ravenii. If you have read or watched Attack on Titan, the broad strokes of Extinction will be very familiar. The world is styled as if it were in the Middle Ages, with its most striking imagery provided by the sight of a colossal beast standing head-and-shoulders taller than the city’s highest walls.

When attacking a Ravenii, an off-screen advisor tells you to target the base of the giant’s neck, which just so happens to be the tactical advice offered to every character in the immensely popular Japanese anime. Whether Attack on Titan fans see Extinction as an opportunist knock-off or loving homage remains to be seen, but it clearly has something to offer to followers of Eren and Mikasa. 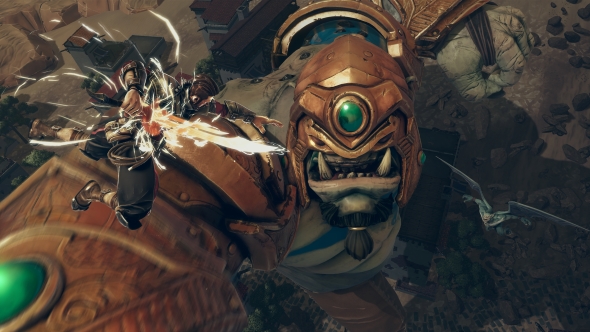 As the title of the game suggests there is no stopping the Ravenii onslaught. Civilisation is doomed but perhaps you can save a few people on your quest. And so the two key components of the game’s missions are established: killing monsters and rescuing civilians.

The first of those elements is by far the most accomplished. The giants attacking humanity’s last cities come in a variety of forms, and attacking them plays out a bit like a garishly coloured Shadow of the Colossus battle on fast-forward. The basic concept is that you need to decapitate your hulking foe, but a variety of things will prevent you from easily doing that. The first is that giants do not tend to stay still for very long, and a single swipe of their hand will kill you outright. Thankfully, death only has a small penalty, so it is simply a case of trying over and over, perfecting your strategy between each run.

That is easier said than done, especially as the Ravenii are very tall, and climbing them isn’t simple. While acrobatic player character Avil has a grapple hook, it is not the omni-directional harness of Attack on Titan, so simply launching yourself at a giant is out of the question. Instead, you will need to hack a leg off, causing the giant to land heavily on its butt, and then you can sprint up its back to land a final blow to the base of the neck. 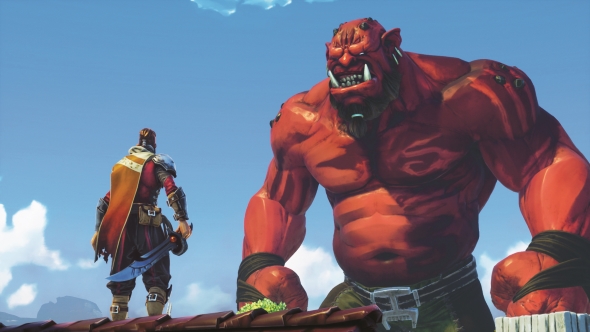 Thankfully, slicing off arms, legs, and heads is pleasantly simple. There is a special Rune Strike attack that slows time, allowing you to target the cut zone, and a single strike of your blade is enough to do the trick. What complicates matters is the fact that, not only do giants move around a lot, they also wear armour that prevents you from immediately damaging them. Wooden armour splinters away with a simple attack, but heavier plates are locked into place, with several bolts that must be destroyed in order to remove them. Other higher-tier armours include panels covered in spikes that you cannot climb on, and bone armour that is indestructible until the flames flickering inside a skull decoration are extinguished.

These giants are certainly Extinction’s strongest asset; it is thrilling to face off against a massive enemy using mechanics that are not either simply hitting a foot until the creature dies, or responding to button prompts. However, I do not think Iron Galaxy have fully captured the stress and hard work that I associate with defeating such a creature. One-strike dismemberment feels undeserved, despite the armour puzzles that need to be deciphered beforehand.

Ravenii are not just scary monsters. Their presence adds time pressure to a mission: if the entire city is demolished (every wall and building can be destroyed by the giants) then it is game over. That would be fine if Extinction’s cities were worth caring about. Made up of boxy, copy-pasted buildings and scattered trees, the cities feel more like the MDF cut-outs the military use for training purposes than a lived-in world. Much of that sense is down to the fact that the settlements are giant platforming puzzles. To save civilians, you have to find crystals around which the helpless inexplicably gather, and getting to them typically requires a fast combination of jumps, dashes, and swings. 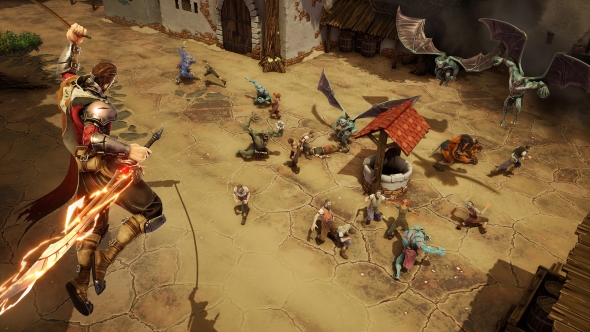 Saving civilians is pretty much mandatory since each rescue fills the Rune Strike meter required to decapitate the giants, but that is all it feels like: a mechanical pay-off. Where is the emotion? The movement system has good intentions but during my demonstration I found myself frequently overshooting the mark and never quite feeling in control. As such, doing anything that is not slaying monsters feels like awkward, frantic busywork.

Yet despite disliking the non ogre-bashing side of things, I recognise that it is required in a game like this. Extinction is all about time pressure, and rescuing civilians is the puzzle component that forces you to quickly decide what needs your attention first. My feelings there apply to everything I have seen of Extinction so far – a really solid collection of ideas that do not quite work in practice yet. There is certainly an audience of Kaiju-loving, Attack on Titan-watching, giant-slayer wannabes that need a game to fulfil their fantasies, but I am not confident that Extinction will entirely satisfy them. As a snack to enjoy while waiting for a more fulfilling main meal, however, it may find its appreciators.