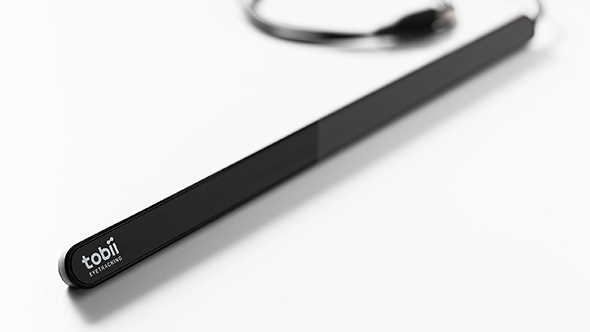 Eye tracking has taken another important step towards widespread adoption. Led by Tobii, eye trackers have now been approved for a USB Human Interface Device (HID) standard – the same used for modern gaming mice. This move increases ease-of-use, and allows for simpler plug-and-play experiences and for eye tracker manufacturers to continue to develop the market even further.

Tobii have been slowly chipping away at bringing eye tracking to client computing since 2001, largely through partnerships with various large OEMs, including Acer, MSI, and Alienware, but also through standalone eye/head tracking devices. I’ve tried out the Alienware version for myself, and I found the eye tracking bar to be surprisingly responsive and accurate – even in the limited lighting of a busy event.

The application for a new USB standard with USB.org was submitted by Tobii, with support from Microsoft, Intel and Eyetech DS. Once completed, this new HID standard will allow devices to utilise a generic protocol for communication between eye trackers and a computer. Goodbye, vendor-supplied driver packages.

Any eye tracker, be it Tobii or otherwise, can utilise the generic drivers, and this opens up way more freedom and reduces development costs for eye tracker manufacturers. Consumers are free to shop around, and plug-and-play is easier than ever.

Eye tracking has been touted for use with FPS shooters, VR headsets, AR applications, and even productivity use. There’s already a huge library of titles that support eye tracking, including: Far Cry 5, Vermintide 2, Final Fantasy XV, and Assassin’s Creed Origins to name a few.

This could also be a useful feature for many PC users with assistive technology needs and disabilities, who require eye tracking for day-to-day function. This standardisation may be able to make the hardware a lot easier to get up-and-running. Specialised accessibility software and support can always be found through Tobii Dynavox.