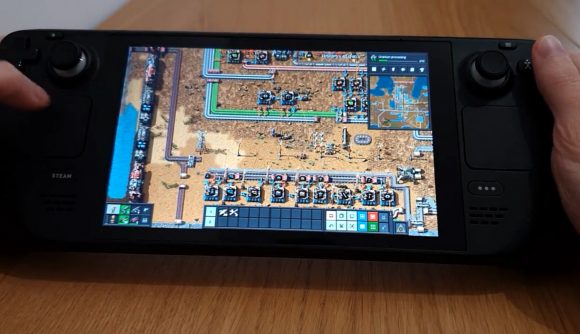 The developer of Factorio has begun experimenting with “proper controller support” for one of the best management games on PC, with the goal of implementing it “later this year” – a decision it came to while trying Factorio on Valve’s Steam Deck handheld.

With the Steam Deck now officially out, the first owners of Valve’s new portable gaming PC are finding out its quirks – as Factorio developer Wube Software discovered regarding their own strategy game and reported in a new blog post. While Factorio was initially used to advertise the Steam Deck, and it apparently “technically works great”, the team ran into trouble with the controls.

“Factorio was designed always with only mouse and keyboard in mind,” explains developer Twinsen. They show a video of them getting it working, but it apparently requires players to make their “own controller configuration using Steam Input, trying to map the Steam Deck’s buttons to keyboard and mouse interactions” – which apparently also needs “a lot of patience and a good understanding of Steam Input’s action sets, layers, radial menus, et cetera.”

“If you want to play Factorio on the Steam Deck,” Twinsen concludes, “you don’t need to worry about any technical limitations, but you will need some patience, either setting up Steam Input or waiting to see if Factorio gets proper controller support.”

As for Factorio itself, it’s recently hit its sixth anniversary and passed 3 million in sales – so it’s in good shape.