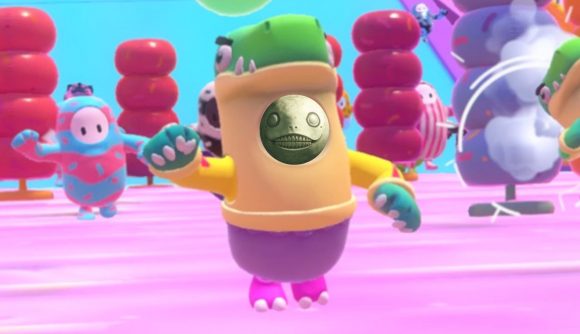 Fall Guys is beyond ‘hit’ at this point, so I think it’s time we upgraded our verbiage to ‘phenomenon’. Everyone’s talking about it, including Nier Automata director Yoko Taro, and he wants to bring his world of sad androids into the actually-similar-when-you-think-about-it existential terror of Fall Guys.

As part of a Fall Guys stream celebrating the birthday of Square Enix producer Yosuke Saito, Taro says he wants to do a Nier x Fall Guys collaboration. “I think the machine lifeform costume would be really cute,” Taro says, as translated by Mediatonic’s own Ed Fear. “Or an Emil head!” Since Fear was already in chat as it happened, it looks like the two studios are on the fast track to make this collaboration a reality.

“I mentioned in that livestream chat that I worked at Mediatonic and Yoko Taro saw it,” Fear says on Twitter. “Now I have been asked to tell the team officially that the Nier team at Square Enix really wants to do it.”

Taro responded to the excitement over the collaboration directly, too, saying simply, in English, “please”.

Fall Guys has already enjoyed multiple collaborations with Valve, including a Gordon Freeman skin to rep Half-Life and a P-Body skin from Portal 2. Plus we still haven’t seen the end of that whole battle of the brands thing just yet. Fall Guys’ unique take on battle royale games has clearly captured the imaginations of the gaming world.