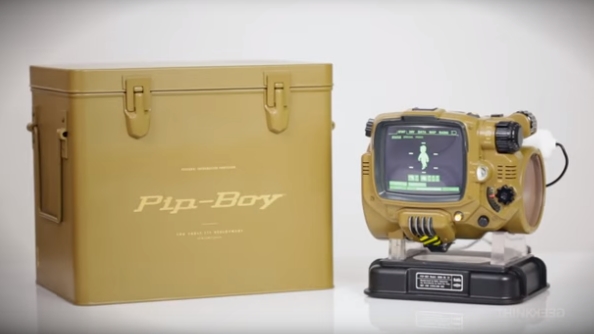 Did you spend your life savings (and potentially sanity) on the Fallout 4 collector’s edition last year? You know the one: it came with a Pip-Boy replica, and became so sought after that it sold out and led to shops cancelling people’s pre-orders days before release. Well, Bethesda are releasing a new version of that Pip-Boy that’s basically loads better.

ThinkGeek are the company behind the new version, which still works as a smartphone dock for your wrist, but now has the added benefit of having buttons that work. By using bluetooth to connect the phone and Pip-Boy together, the dials and switches now make your phone do things, such as answer calls.

It also has a holotape (see: USB stick) deck, which can be loaded with songs to be used as an alarm clock. That seems like a far more sensible option than wearing it as a steampunk Apple Watch alternative.

The Deluxe Bluetooth Edition Pip-Boy will be available in November for US and Canadian customers, and will cost $350. For that money, hopefully the build quality is much better than the original version, which was plastic tat if we’re being perfectly honest.